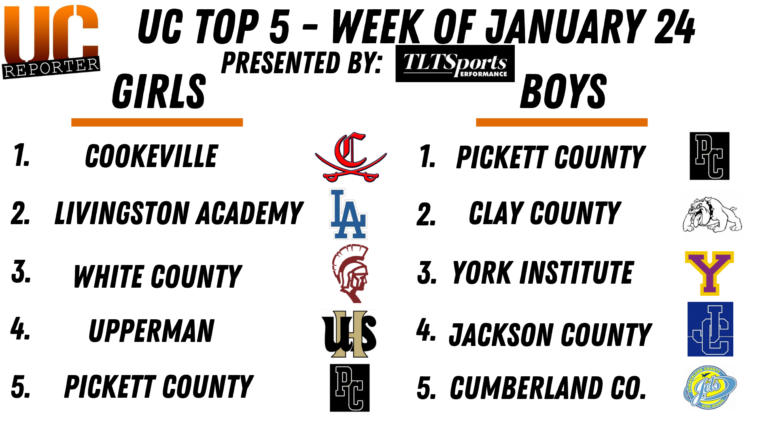 Last week was a fun week of high school basketball in the Upper Cumberland. Early in the week saw some great matchups get cancelled, Tuesday and Saturday we saw big upsets and Friday was a night full of critical district matchups

There is a new name on the girls’ list for the first time in two months. Find out who it is and more in this week’s UC Top-5 Presented by TLTSports Performance.

21-0. The Lady Cavs are nearing an undefeated regular season, but the goal is clear for CHS: Gold ball or bust.

The Lady Wildcats lost their first game in 2022 in a 14-point loss against Cumberland County. That game showed how tough District 7/AAA is on every night, but it was the Lady Wildcats third game in third nights against a good Lady Jets team. The totality of their resume leads us to leave them at the second spot.

The Warriorettes may need to send a fruit basket to Crossville. They now find themselves in control of their own destiny in District 7/AAA, and after their win over Upperman on Friday they appear to be building momentum into the final weeks of the season, but they’ll face tough tests with two matchups against Cumberland County and a road matchup at Livingston.

The Lady Bees had a tough week. Three straight district losses probably ended their shot at a regular season district title, but they bounced back with a win over Clarksville NW. The UHS defense will keep them in every game they play, but they’ll continue to look for more scoring depth on the offensive end as they try to build towards a postseason run.

For the first time since November 22, there is a new girls’ team in the UC Top 5, and the Pickett County Lady Bobcats have earned their spot. They’ve built a 16-3 record, and a 5-0 District 7/A record. They have wins over Powell, Clarkrange and two over Red Boiling Springs. They have a huge home matchup Tuesday against Clay County, but for this week they have earned the number five spot.

The Bobcats only had one game last week, as they rolled past Gordonsville. It all comes down to Tuesday when they host Clay County to see who goes into the driver’s seat in District 7/A.

The Bulldogs also only had one game last week, rolling past Clarkrange. If they can knock off Pickett County, they’ll ascend to the number one spot.

The Dragons have won four straight, building a 3-0 district record. Nic Smtih is playing at a Mr. Basketball-level, and the Dragons have the pieces to make a deep run. They have a huge test at home Thursday against Pickett County.

The Blue Devils dominated Sequatchie County and Red Boiling Springs last week. They simply stay at the four spot because of their recent head-to-head loss against the Dragons. This is a very good JCHS team.

After a slow start to the season (against a good schedule) the Jets have rattled off six straight wins, including a big 52-49 win on Saturday at Livingston to move all alone in first place atop District 7/AAA. It’s been a revolving door at the five spot this year, but the Jets are deserving of a spot on the list due to their recent play.