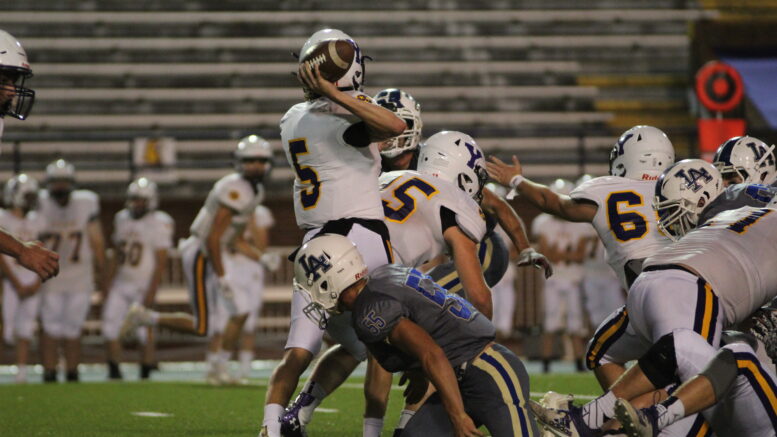 The York Institute Dragons have a new football coach, as Derwin Wright was announced on Tuesday as the program’s next head man.

The hiring comes on the heels of former coach Kerry Johnson being let go after back-to-back 3-8 seasons and two first-round eliminations in the state playoffs.

Wright was the previous coach in 2019, where the team went 3-7 in the regular season before falling to Loudon in the Class 3A playoffs. For Wright, he says that the main decision to get back into coaching was the taste that was left in his mouth in his last season.

“The last three years I was in, we were 9-2, 9-2 and then we finished with a 3-7,” Wright said. “I just never did really get that taste out of my mouth to be honest with you…I talked to my wife and thought about it, and decided it was the right time to get back into it. It was where I started my career, and I feel like it’s just where I need to be.”

2021 saw the Dragons maintain their affinity for running the ball and playing physically, while also mixing in some more passing plays with quarterback Myles Leffew. While he’s known for primarily running the Wing-T, Wright says he’s going to use his players strength to their potential.

“Offensively, you look at what your skill level is and what you’re capable of,” Wright said. “I think (Leffew) has a lot of different skill-sets, and we’re not going to be predominantly in the double-wing…I just don’t think it fits these kids. We’re going to be a Wing-T-type team, but it might be out of the shotgun set. Spring practice will tell me a lot about that.”

One thing that fans in Jamestown can be assured of is that Wright wants a physical brand of football to be played, and for him, it comes down to fundamentals.

“The first thing we’re going to do is get busy in the weight room,” Wright said. “Football comes down to teams that are great tackling and great blocking teams. The number one place to build that is in the weight room.”

As far as what he’s looking forward to the most about being back, Wright says he’s excited about being able to impact both young men and young coaches.

“Being involved with these young men, it’s always a joy to see a freshman come in and develop through his career,” Wright said. “Hopefully we’ll send some kids on to college…I’m at a point in my career that I enjoy helping young coaches as well. I’m just looking forward to being out there, a coach can make an impact on some young people’s lives as much as on the field.”