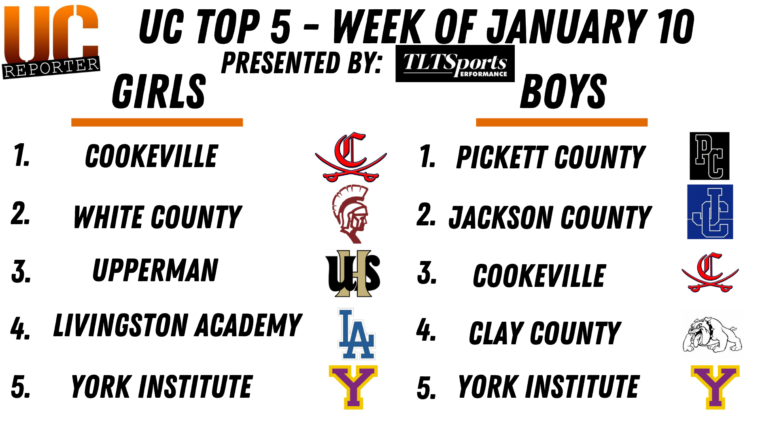 I hope everyone enjoyed their snow days! Some great matchups were rescheduled (i.e. Cookeville-Sparta and Pickett-Clay), but there were some good games last week. Let’s get right into this week’s UC Top-5 Presented by TLTSports Performance.

The Warriorettes stayed atop District 7/AAA with a win over Stone Memorial. They have a huge test on Tuesday when they host Livingston. If they win, they’ll be in the driver’s seat for the district title. If not… buckle up.

The Lady Bees throttled their rival Macon County on Tuesday. They have an opportunity to keep pace in the race for the district on Friday when they travel to Livingston to try and knock off the Lady Wildcats.

This is the week we’ve been waiting for the Lady Wildcats. They could be in first place in the district at the end of the week, or comfortably in third. Keep your eyes on freshman star Eliie Butler, who is having a dominant season.

The Dragonettes fell against Cookeville on Tuesday, but there’s no shame in that. Now the real season begins as they begin their push towards the AA state tournament.

The Bobcats handled Clinton County (KY) on Tuesday, before Friday’s postponement. Finally, we have some consistency at the top of the list courtesy of the squad from Byrdstown.

The Blue Devils got revenge and throttled Trousdale County in an impressive win and followed it up with a win over Gordonsville. They appear to be emerging as the favorite in their district, but have a huge matchup on Friday when they host York.

Here come the Cavaliers. They are starting to look like the team that was the preseason top-ranked team on the list. They got a nice win in Jamestown last week and appear to be finding their stride at the right time. Four wins in a row has our attention.

The Bulldogs had a chance to catapult back into the top spot this week, but the snow had other plans. They haven’t seen the floor since December 29. Will rust be a factor this week? We doubt it.

The Dragons are going the wrong direction with two wins in their last seven, but they have a big opportunity this week against Oneida and Jackson County to get right and begin to roll towards the postseason.