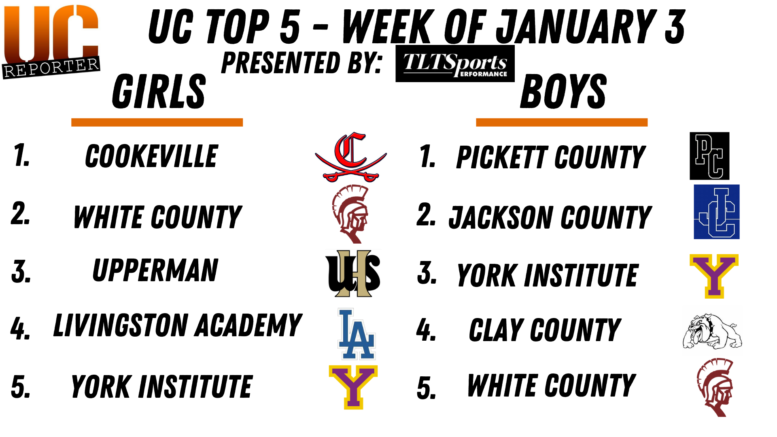 Merry Christmas and Happy New Year! Hopefully you were able to spend it with your families. We had a week away from the list after spending the week in Phoenix with White County for the Cactus Jam, but we’re back and it’s time for the UC Top 5 Presented by TLTSports Performance!

Once again, the girls’ list remains the same, but there are some serious changes to the boys’ list. Let’s get into it!

The Lady Cavs are 16-0. Sixteen wins and zero losses. Next.

The Warriorettes lost two games since our last list, this time against Warren County in the championship game of the Sonic Shootout and a great team out of Ohio in Phoenix. Each of their losses came against good teams, but they’ll need to work on their execution in the final moments of close games, because more close games are coming soon in district play. Their blowout wins over Cascade and Clarkrange and two wins in Phoenix were more than enough to keep Sparta in the second spot.

The Lady Bees had a nice week in Greeneville with their lone loss coming against a Greeneville team that we expect to be in Murfreesboro. The formula for the Lady Bees is simple, get the ball to Abigail Johnson in the post and let her go to work and free up the shooters on the outside. That formula can take them a long way, as long as they avoid foul trouble.

The Lady Wildcats are inching closer to the third spot on the list. They are up to 13-2 with a nice showing in a tournament in South Carolina. We will get a clear answer as to just how good this Lady Wildcats team is on January 11 when they travel to Sparta to take on the Warriorettes. If they win that, this could be a team that makes a trip to the Glass House.

The Dragonettes only got to play one game in the Sonic Shootout due to circumstances beyond their control, and they dropped their matchup against Warren County. They played that game without Gabby Beaty, and then that Lady Pioneers team knocked off Sparta. They then had a week off, but they keep their spot in the top 5. We are still believers in the Dragonettes.

For the second straight week we have a new number one. The Bobcats have been impressive all season, and they finally have ascended to the number one spot in the rankings. They enjoyed another undefeated week, and their lone losses have come narrowly against 4A squads while not playing with a full lineup.

Joseph Amonett has his squad playing at a high level, and the Bobcats have an argument to be the number one ranked 1A team in Tennessee.

The Blue Devils are rocketing up the rankings, moving from Honorable Mention to 2nd in just three weeks. Outside of a head-scratching loss against Trousdale County, JCHS has impressed throughout the season. They enjoyed a 2-0 week in Celina two weeks ago with wins over a good Hampton squad and a Bradley Central team that defeated Clay County.

The York Dragons have some serious competition for the top of District 5/2A.

Speaking of the York Dragons, they had a tough week at the Sonic Shootout, going 0-3. You have to mention the revolving door of players during the tournament with several key players missing some or all of the games played in Sparta, so the Dragons should not be written off, and they bounced back with a 2-1 week last week at a tournament.

Nic Smith is continuing to play at a Mr. Basketball level, and when they get their full roster back this Dragons team will have the chance to ascend up the list again and challenge for first place.

The defending state champions are still a great team, and could repeat in March, but its been a rough couple of weeks. Losses against York and Bradley Central were offset by their win over Hampton, The teams above the Bulldogs on the list simply have more impressive resumes at this point in the season, but they could end up in the top spot before the season ends. They have a chance to jump back up to the number one spot with their first matchup of the season against Pickett County this week.

The Warriors have had an eventful two weeks, starting in disastrous fashion with a loss against the Tennessee Heat, but the Heat are pretty good, and WCHS bounced back with wins over Warren County and Coffee County. They then went 1-2 at a tournament in Florida, but it’s hard to gauge the competition level there. We’ll be watching their matchup against Cookeville this week closely.