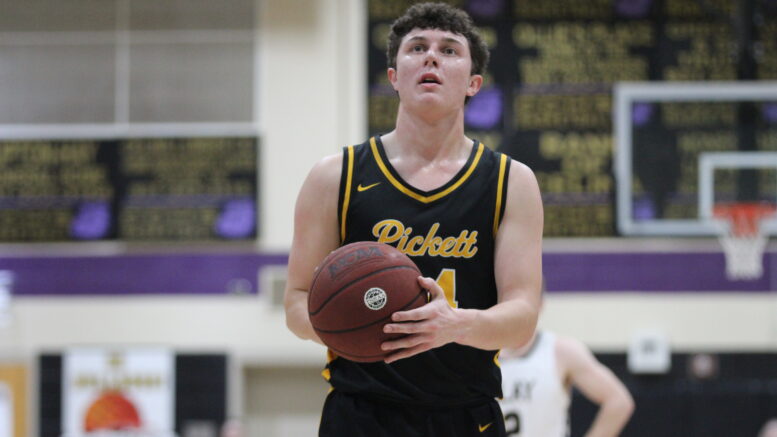 Former Pickett County Basketball star Hunter Wattenbarger took the next step in his athletic and academic journey earlier this week by signing his national letter of intent to play basketball at Cumberland University.

“It was really rewarding because I’ve worked hard for 14-15 years playing basketball,” Wattenbarger said. “Putting up thousands of shots and for it to pay off and know it wasn’t for nothing, it feels really good.”

The two-sport star for the Bobcats actually received a fair amount of attention for his skills on the baseball diamond, but he says last week was when things really started progressing with Cumberland.

“I was actually on vacation and the coach called, so we set up a visit,” Wattenbarger said. “The school had the amount of people I wanted, and the team was like a family…to be able to continue my career and it pay for my school, that’s a big plus.”

Wattenbarger has never lacked the competitive spirit at the high school level, and as far as what he’s looking forward to at the collegiate ranks, he’s ready to continue bringing that nature to the hardwood.

“I’m going to work as hard as I can,” Wattenbarger said. “I want to help the team be as good as we can overall…I love to compete, so to have an opportunity to do that is amazing.”

Wattenbarger spent two seasons in Byrdstown, and helped lead the team to a state tournament appearance as a junior and a region tournament berth as a senior. When he leaves, Wattenbarger says he’ll miss his teammates and the support from the community in Pickett County.

“The community is amazing, and any time I go anywhere, it’s just smiles and good greetings,” Wattenbarger said. “I have nothing but good things to say about the Pickett County community…I’m definitely going to miss my teammates. They were brothers and we’ve been through it all together.”