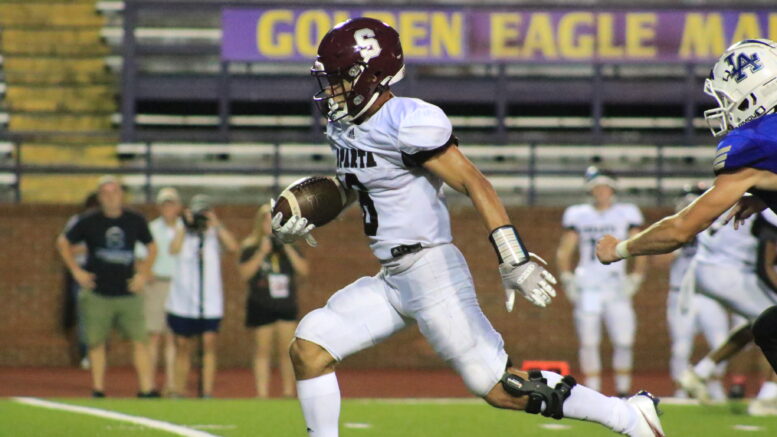 The 2022 high school football season is set to begin. UCR’s Noah McKay and Rusty Ellis created a list of the top 10 players they are watching in the upcoming season. While there are no shortage of great athletes in our area, including many who did not make the list, here are 10 we believe you should keep your eye on.

McKay: The top high school football player in the Upper Cumberland is gearing up for his senior season, and we are excited to see him. Coming off a 2,000 yard junior season, Dowell is a rare talent and fans and college recruiters alike should be keeping their attention focused on Sparta’s tailback.

Ellis: He’s the fastest player in the Upper Cumberland and is coming off a 2,000-yard season for the Warriors. With a full offseason to focus solely on getting stronger and faster instead of rehabbing a knee injury, Malaki Dowell will be a must-see player.

McKay: Rollins emerged in his sophomore season as the heir apparent to Dowell’s spot as best player in the area. He has dynamic speed and is emerging as a defender. He appears poised for a Mr. Football level season.

Ellis:  Rollins was dynamite as a sophomore, and he put together one of the best seasons in the state at the running back position. After scoring over 20 touchdowns, Rollins could very well top that number in 2022.

McKay: Talk about a one-two punch… the Bees certainly have one. It must be an intimidating sight for a defender to see #2 in the gap one-on-one. Dedmon has a great mix of power and speed, and is one of Upperman’s most important players on each side of the ball. I anticipate a big senior season for Dedmon.

Ellis:  And Rollins’ running mate in the backfield is up there as well. If Rollins is speed and finesse, Dedmon is pure punishment in the backfield. He’s got some speed of his own, as shown on a couple big runs late in the season last year. His impact at the linebacker spot is also worth mentioning, as he’ll help anchor a defensive front for the Bees that could be in for a big year.

McKay: Bowman has been one of the most consistent players in the Upper Cumberland. He is Monterey’s most important piece, and he should have plenty of motivation to try and deliver a long postseason run for the Wildcats. After a 1,700 rushing yard junior season, 2,000 appears to be within sight.

Ellis: As Mason Bowman goes, so shall Monterey. The senior has put together one of the best careers in Wildcat program history, achieving 1,000-yard seasons in all three of his previous campaigns. He’s set to have another big season this year, as the Wildcats fully expect to contend for a region title.

McKay: With the graduation of Isaac Knowles, the DeKalb County offense appears to be about to run through the junior quarterback. He’s got all the tools you want in a quarterback and also has a strong receiving core. In a QB-friendly offense, I expect big things out of Trapp in 2022.

Ellis: The junior lefty put together a solid sophomore campaign that saw him lead the Tigers to a 7-5 season and a second-round finish in the playoffs. He did all of that while dealing with a shoulder injury as well, and he’s shown up to camp bigger and stronger than he was a year ago. With a deep receiving unit, Trapp could be primed for a big season in Smithville.

McKay: This should be a breakout year for Flowers. In a region full of talented players, he is among the best at the skill positions. Flowers should have plenty of motivation to impress college coaches in his senior season, and with his quarterback returning as well I expect a big season for the wideout.

Ellis: In my opinion, this is the best receiver in the Upper Cumberland. Last year as a junior, he set Stone Memorial’s career receiving yards record, and now with quarterback Hunter Heavilon back, Flowers will get a chance to add onto it.

McKay: Albritton burst onto the scene in 2021 and I see no reason for that to change in 2022. He follows in a long tradition of great quarterbacks in Gordonsville, and I expect him to continue to build his legacy. The Tigers appear to have all the pieces of a great football team, but they will go as far as Albritton takes them. Keep your eyes on him on Friday nights.

Ellis: Gordonsville’s quarterback led the Tigers to an 11-2 season and a state quarterfinal appearance in 2021, and there’s no reason that the Tigers couldn’t make a big run this year as well. For everything Albritton does well running the offense, he also plays a big role in the secondary. Last year’s Tigers averaged giving up only 8.9 points per game in the regular season, making Albritton a high quality player on both sides of the ball.

McKay: CCHS head coach Bruce Lamb loves strong running backs, and he has one in Marcom. He will be the bellcow back for an offense that should be explosive in 2022. Look for him to get over 20 carries a game as he punishes defenders who try to get in his way. He could be an underrated Mr. Football-level player this year.

Ellis: A physical, bruising back, Marcom’s been an underrated running back in the Upper Cumberland his entire career in Celina. After seeing him in action in Clay’s scrimmage against Monterey and Coalfield, Marcom is primed to have a big year as a senior. The Bulldogs are a big, physical football team, and Marcom will be at the forefront of their rushing attack with Keaton Arms and Alec Kerr.

McKay: As perhaps the most physically impressive athlete in the Upper Cumberland, you can’t help but notice when Woodard is on the field. He is one of the anchors for an offensive line that will look to bully defenses all season long. Players of his stature don’t come around often, so be sure to keep your eyes on him.

Ellis: At 6-9 and 345 pounds, Woodard’s measurables alone make him a fit for this list. Smith County’s offensive line paced an offense that averaged over 250 yards a game on the ground a year ago, and the Austin Peay commit will lead the charge in Carthage once again this season.

McKay: Leffew is an electric athlete and I am excited to see what he can do in head coach Derwin Wright’s Wing-T offense. If Leffew can get into space consistently, he could put up impressive stats. If the Dragons are able to put together a successful season, I expect Leffew to play a big part.

Ellis: Leffew is one of the best pure athletes in the Upper Cumberland, and the football field last year allowed him to show off that athleticism. Head coach Derwin Wright says that’s one of his biggest strengths at the quarterback, along with his ability to improvise. The Dragons will run most of their sets out of the Wing-T, meaning Leffew will get to use his speed to help move the offense along. I expect a big season out of the junior.