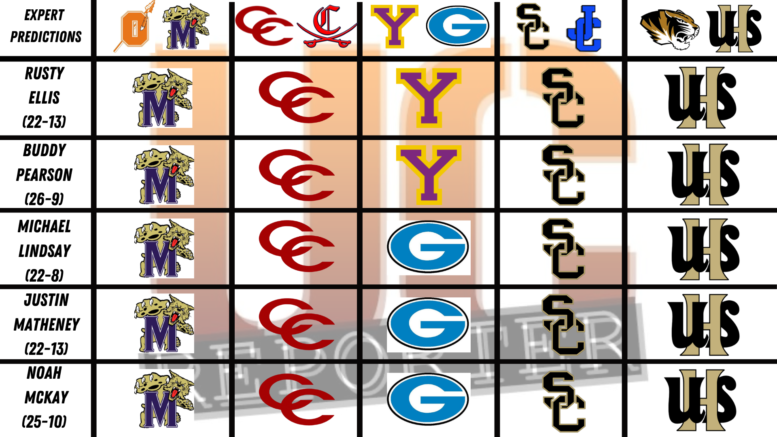 Comments: Monterey returns from the bye week in victorious fashion with a big region win over Oneida. Mason Bowman rushes for a pair of touchdowns and Matthew Montgomery adds one of his own, as the Wildcats move into second place all alone in the region.

Comments: Both teams coming off a bye week. Monterey wins this game and they wrap up the second seed in the region and will host playoff games. How do the Wildcats look after back to back non region games and a bye week?

Comments: Another big region win from the Wildcats against a down Oneida program. The Indians are traditionally a run-heavy team but have went to the air more this year. Monterey controls the line of scrimmage and takes the W.

Comments: This Oneida team has not had the season they’ve wanted so far, but this is shades of 2021 where Monterey was the favorite and lost the game. This year, the Wildcats are at home and have a prime opportunity to virtually lock down a home playoff game. The Wildcats are comfortable in close games, and I think they win another one on Friday.

Comments: There’s little doubt that the Cavs have improved quite a bit since the start of the season, but Coffee County’s just in a different place from them right now. Cookeville will keep it respectable, though they’ll fall short against the Red Raiders.

Comments: A win here and the Coffee County Red Raiders are your region champs and I think it happens. Have the Cavaliers found any answers in the run game or stopping the run? Biggest question mark the last month of the season for me in Cookeville.

Comments: The last time we saw Cookeville, they played a solid game against Alcoa. A bye week should help the Cavs, but Coffee County is no slouch and picks up the win.

Comments: The Red Raiders are the surprise of Region 3/6A, and they can lock up the region title with a win on Friday. The Cavs have a shot in this game, but they’ll have to perform on the defensive side of the ball against an explosive offense. Ultimately, I’ll take Coffee County.

Comments: I like the Dragons in this one, it’s the first of two non-region games that’ll give the a chance to see where they stack up against different opponents in Gibbs and Clay County. The Dragon offense has been humming along outside of their game against Stone, so I think they’ll stay on track in this one.

Comments: I’m going Gibbs here because they are closer to home and they have played a tougher schedule. Also they are in a higher classification. This is a great test for the Dragons on the road for how potential playoff matchups will look.

Comments: We don’t see Gibbs on Upper Cumberland schedules very often. York definitely has a chance, but I think the Eagles control the line of scrimmage just enough to pull out the win.

Comments: This Gibbs offense is explosive. Combine that with a lengthy road trip for the Dragons and I think Gibbs will pull out an exciting win. The next three weeks are tough for the Dragons, if they are able to go 2-1 they’ll be in a great spot entering the playoffs.

Comments: Smith County’s just better at every position and they have the numbers Jackson County doesn’t. Moving on.

Comments:  Smith County has too much size for the Blue Devils here. The Owls are rolling through the last half of their schedule. The last two weeks of the year look to be great for Smith Country with Macon County and East Nashville on the horizon.

Comments: A good Smith County team keeps it going against Jackson County. Won’t be much drama in this one.

Comments: Two teams in different spots and this feels like a tuneup game for the Owls before two very tough matchups to end the regular season.

Comments: If Colby Barnes has a massive game, the Tigers are completely capable of an upset that would throw an already chaotic region into more chaos. I like what the Bees have done defensively against the run however, meaning a lot of this game will come down to Jordan Parker. With the Bees at home, I’m going to stick with Upperman in a close one.

Comments: Upperman under Coach Caine remind me a lot of the Patriots and how they take away the other teams best options on offense. DeKalb County’s offense plus right into Upperman’s strength. Bee’s win at home and are in a race for first in the region.

Comments: I feel like DeKalb is 4-4A’s forgotten team. They’re 6-1 for a reason, and should put up a good fight against Upperman. But the Bees seem to have their swagger back. I think it’s a 1-score game most of the way until Upperman puts in a game-sealing touchdown late.

Comments: The Bees have looked like the Bees over their last two games, but they are welcoming in a red-hot Tigers squad. Colby Barnes has been great, but so has the DCHS offensive line. For me, the question in this game comes down to whether or not the Tigers can establish the run against the UHS front-7. Watertown and Macon couldn’t, so I’ll give the benefit of the doubt to the home team on senior night. This will be a fun one.