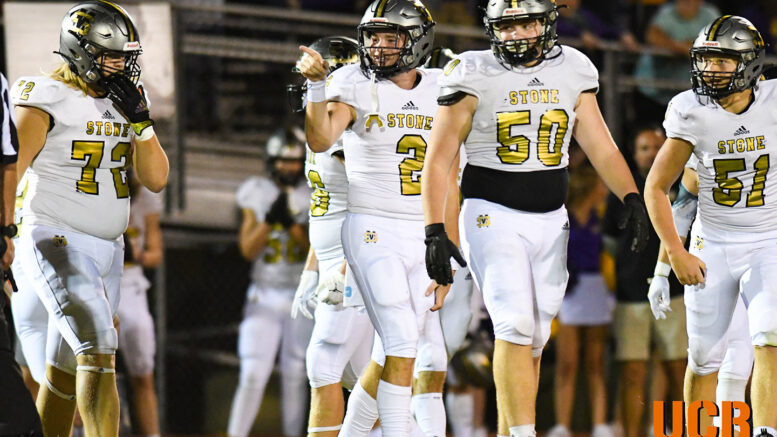 For the 11th consecutive season, the No. 9 Stone Memorial Panthers are the kings of Crossville as they defeated Cumberland County Friday night, 40-14.

“We knew they wanted to make it a dog fight, and we were at their place,” said SMHS head coach Derik Samber. “We were sloppy for about a quarter, and they had a really good game plan so credit to them. Eventually, we settled in and took care of business.”

Stone Memorial’s damage came through the air as they threw for 208 yards while rushing for 109.

SMHS senior quarterback Hunter Heavilon put together yet another impressive performance as he went 14-18 for 208 yards and three touchdowns through the air. Heavilon rushed for 13 yards and a touchdown, also.

“Hunter was really efficient and made good decisions,” Samber said. “He still had the chunk plays, and that was good to see.”

The Panthers’ big win didn’t come without struggle, however, as Cumberland County slowed down the high-powered Stone Memorial offense for most of the first half.

“It was a little different from what they’ve (CCHS) been doing,” Samber said. “I want to credit our kids; we adjusted on the fly. It’s a chess match. They want to take away what they’ve seen on film. Do you have another move in your back pocket? Our kids responded well and made plays.”

Stone Memorial went up 13-0 late in the second quarter on an 8-yard Heavilon touchdown run.

The Panthers weren’t done in the first half, though, as Heavilon hit Flowers for a touchdown pass with seconds on the clock to put Stone Memorial up 19-0 at halftime.

After pitching a first-half shutout, Stone Memorial’s defense got on the board early in the third quarter as cornerback Braden Looper picked off a CCHS pass and returned it 94 yards for a touchdown, giving SMHS a 27-0 lead.

“He undercut a route and the blocking was great,” Samber said. “Very similar to Kaleb’s last week. Braden said he was worried about running out of gas about midfield, but got another burst of energy and was excited to celebrate that one.

“Our defense has played really good ball; I don’t think that’s a secret at this point,” Samber added. “They’re finding ways to give our offense short fields, or scoring themselves.”

Trailing 27-0, Cumberland County responded to the adversity by getting a touchdown of their own on the board. Freshman quarterback Noah Potter hit Adam Packett on a 22-yard touchdown pass to get the Jets on the board. Jaime Perez added the extra point to make the score 27-7.

Cumberland County tacked on a final touchdown in the fourth quarter as Keithon Patterson rushed in a 2-yard score, making the final score 40-14 Stone Memorial.

Stone Memorial is 7-0 and ranked No. 9 in the most recent AP Class 4A polls. Seven consecutive wins tie their best start since 2018 when they went 9-1 in the regular season.

“I promised them big things, and told them we could do things never done in Crossville,” Samber said. “The guys have done a really good job at locking in week to week.”

Cumberland County falls to 0-7 with the loss and travels to Livingston Academy (0-7) next week for Region 4-4A play.

Stone Memorial hosts AP No. 7 Macon County (6-1, 2-1) with the Region 4-4A regular-season title on the line. A win locks up first place for Stone Memorial.