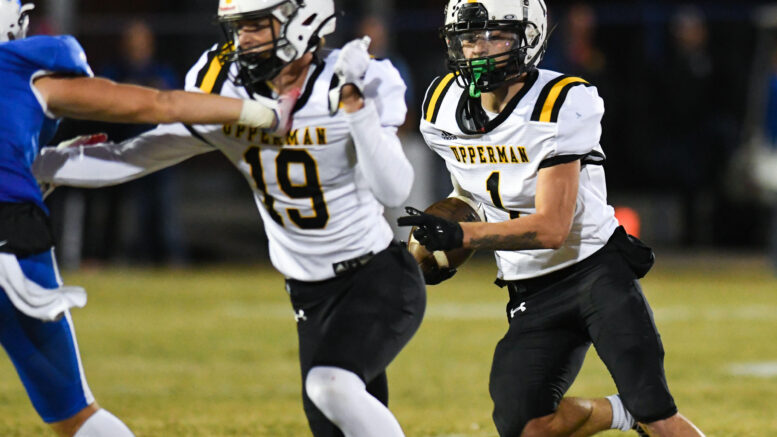 The football season is heading quickly towards postseason play, and with that comes some close region races that will likely be decided in the final week of the season.

Here is everything you need to know about this week’s action.

The Cavaliers got off to a great start against the Tornadoes, as they took a 7-0 lead on a 28-yard touchdown pass from Mace Thomsen to Brock Owen. Things went off the rails from there, as the seven-time Class 3A champs took control and never looked back. Despite the score, Cookeville battled and that’s all head coach Taylor Hennigan could really ask for. That, and coming out of this game healthy.

The Bees ended Macon’s bid for a perfect season with a two-touchdown victory on the road over the Tigers. Jaxson Rollins and Terrance Dedmon each ran for over 100 yards and a touchdown, looking more like the duo that played the first three weeks of the season. If this was the Bees getting back on track, nobody should want to play them come postseason time.

In a game that took over three hours to play due to penalties on both sides, Stone Memorial pushed their record to 7-0 with a win over heated rival CCHS. Stone Memorial QB Hunter Heavilon went 14-20 for 208 yards and 3 touchdowns through the air in the victory. Despite the lop-sided score, Cumberland County appeared to find a little bit of success in the second half on offense, it was just too little, too late against Derik Samber’s squad, who now firmly sits in the driver’s seat for the region championship.

DeKalb County also held serve within the region by taking care of business against the Wildcats, who are now losers of their last 19 games. Colby Barnes and Jordan Parker continued their excellent play, and the Tiger defense pitched a shutout to push their record to 6-1 and their winning streak to four games since the loss to Macon in early September.

This was the kind of showing the Wildcats needed after last week’s win against Tennessee Heat. A less-than-stellar showing against a non-TSSAA opponent left plenty to be desired for Scott Hughes’ team, and they bounced back in a big way against a solid Lakeway Christian team. Mason Bowman scored three total touchdowns, two of which came in the second half, and added an interception on defense to lead the way for Monterey, as they can take full control of their destiny and earn a home playoff game in these last couple of weeks.

The Dragons held serve within the region with a dominant showing against Wartburg. While the offense gets a lot of shine for its explosiveness, the Dragon defense has really stepped up in region play and has looked much improved over the unit from a year ago. Derwin Wright has certainly played a big part in that development.

The Bulldogs bounced back from their first loss of the season against Westmoreland in a big way on Friday, as they dominated RBS from start-to-finish on both sides of the ball. Bruce Lamb has done a good job of instilling that short-term memory in his players, as they moved their record to 6-1 and sit atop the region standings with a 2-0 record.

The Tigers of Gordonsville are hot the Bulldogs’ tails though, as they took a close win in their first region game of the season against Jo Byrns. While not the score many expected, the Tigers proved they can win close, defensive battles just as much as they can by outscoring people. Stephen Jackson’s imprint on this team is clear in year one as the head coach.

Staying in Carthage, the Owls kept their winning streak alive with a dominant win over Stratford. Matt Dyer’s unit hasn’t lost a game since their week two tilt with DeKalb County, and they appear to be constantly improving in all three phases with each passing week. It’ll be interesting to see how they match up with state title contender East Nashville when they play in a couple weeks.

The Blue Devils couldn’t build on their win over Livingston Academy, as they fell by 14 to Maplewood on the road. Jackson County is starting to find some consistency on offense. After scoring just nine points in their first five games, they’ve scored 37 points the last two weeks. There’s progress for this offense, though they’ll need to put it together a little bit more in order to make the playoffs.

In what is undoubtedly the shocker of the week, Sparta took their second loss of the season at the hands of Wilson Central, who found success against a White County defense that had been better as of late. Just like Clay with their loss to Westmoreland, it’ll be interesting to see how the Warriors rebound from this one. Will it bother them, or can they move past it and learn from it?

After weeks of falling in close contests, the Pioneers fall a little more decisively against Coffee County. As things stand right now, next week’s matchup against Shelbyville could very well be played with a playoff spot on the line. Matt Turner’s squad has done a lot of things right despite the record, so that’ll be a much-watch for teams in the area despite the combined records of the two teams being 1-12.