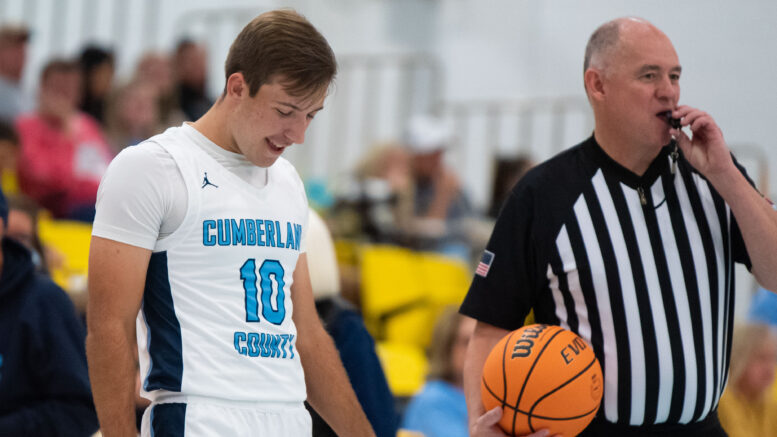 Tuesday’s battle of Columbia Blue was all Cumberland County as the Jets and Lady Jets defeated McMinn Central.

In girls action, 16 points from CCHS forward Jalynn Baldwin led the way as the Lady Jets defeated the Chargers. Seniors Jorja Anderson and Abby Houston also hit double figures as Anderson scored 13 along with 10 by Houston.

Cumberland County held a narrow 13-11 lead after one quarter before pushing their advantage to 26-19 by halftime.

A 19-point third quarter saw Cumberland County race ahead to a 45-33 advantage going into the fourth period.

The Lady Jets put the game on ice over the final 8 minutes, going 4-5 from the free throw line along with three baskets from Baldwin to win 58-51.

CCHS improves to 2-1 overall and competes next in the Cumberland Thanksgiving Classic on Saturday vs. Meigs County.

In the boys game, Cumberland County held off a late McMinn Central run to win 45-43. The Chargers missed a buzzer-beating three-pointer to preserve the CCHS win.

Senior Jaxon Reed led the Jets with 16 points and 7 rebounds followed by 10 points from Braeden Woodard.

Cumberland County looked poised to run away with the win early as they led 19-7 after the first quarter. The Jets’ lead grew in the second period as they held a 29-19 halftime advantage.

Out of the locker room, McMinn Central’s second-half adjustments were effective as they outscored the Jets 15-8 in the third period and trailed 37-31 going into the fourth.

The Chargers battled back late in the fourth quarter, cutting Cumberland County’s lead to one point (44-42) with less than 15 seconds left. The Chargers hit a free throw to bring it within one point.

The Jets added to their cushion via a Braden Leviner free throw with less than 10 seconds left, putting CCHS up 45-43. McMinn Central got a 3-pointer off at the buzzer that fell short, preserving the Jets’ first win of the season.

Cumberland County improves to 1-2 overall and competes next in the Cumberland Thanksgiving Tournament on Saturday vs. Meigs County.

Be the first to comment on "Cumberland County Sweeps McMinn Central"