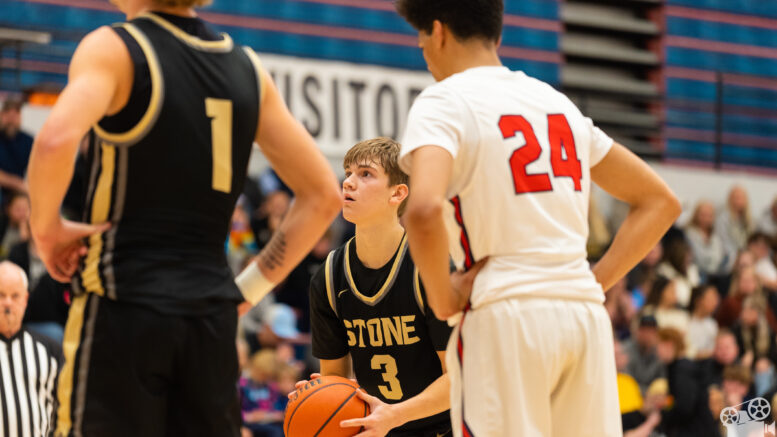 A balanced effort from the Stone Memorial Panthers was key Tuesday night as they won at Cookeville, 65-57.

“We had a lot of guys play well; this was one of our most balanced scoresheets all year,” said SMHS head coach Neil Capps.

Leading the way for Stone Memorial (4-0) was the all-state duo of Cade Capps and Matthew Bilbrey, who scored 17 points each. Connor Bowman also hit double-figures with 10 points.

Leading Cookeville was Jaren Davis with 18 points, followed by Jack Oakley with 13.

A close first quarter saw Stone Memorial lead 14-12 after 8 minutes. The Panthers opened the second period with an 8-0 en route to a 33-26 halftime lead.

Stone Memorial repeated their strong second-quarter start in the third period via a 15-3 run to lead 48-29 early in the fourth quarter.

“We were able to stretch it out a little bit, but we knew Cookeville was going to make a run and start knocking down shots,” Capps said. “I really like the resolve of our team; they made plays when they needed to.”

Cookeville wouldn’t go away quietly as they cut the Stone Memorial lead to single digits (63-54) late in the fourth, but it ultimately wasn’t enough as Stone Memorial closed out to win 65-57.

The Panthers improve to 4-0 with each win coming over a Class 4A program.

“To win four games against 4A schools on the road, we’re tickled with that result,” Capps said. “I told the guys if we don’t come out focused, we could be 0-4. We wanted to challenge this team and so far we have.”

The Panthers will face Meigs County Friday afternoon and take a week off before facing Webb School of Knoxville on Dec. 2.

Cookeville will see a 10-day break as they take the court next against White County on Dec. 2.

Be the first to comment on "Stone Memorial Boys Win at Cookeville, 65-57"