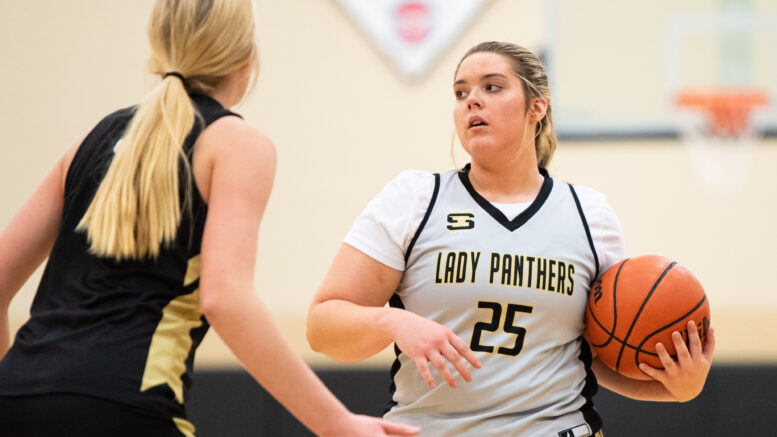 Tuesday’s season-opening doubleheader in Maryville was all Stone Memorial as the Panthers and Lady Panthers picked up victories.

In girls action, sophomore forward Kortney Headrick led the way with 28 points and 15 rebounds as the Lady Panthers defeated Maryville, 61-46.

“Kortney really shot it well and did great on the glass,” Buck added. “She made some composure plays and played really well.”

Stone Memorial led 14-13 after the first quarter but found themselves down at halftime, 24-23.

“That was part of our halftime talk,” Buck said. “We left so many opportunities out there. For them to keep plugging away was a sign of growth.”

The Lady Panthers took a 26-24 lead early in the third period and never looked back as they led 41-38 after three quarters.

A 20-point fourth quarter sealed the deal for Stone Memorial as they won 61-46. Stone Memorial went a perfect 8-8 from the free throw line and outscored Maryville in the paint, 38-16.

“We didn’t have that interior threat last year,” Buck said. “I’ve dug out some plays from a few years ago and we had some success. Having the ability to go inside to set the tone is a powerful thing.”

In boys action, the Panthers’ win came down to the wire as they defeated the Rebels, 60-57.

Like the girls, Stone Memorial’s boys trailed by one possession at halftime, 28-26.

The Panthers led 51-43 with less than four minutes left before Maryville rallied to cut the SMHS lead to one possession (57-54) with 27 seconds left.

A pair of Matthew Bilbrey free throws pushed the lead out to 5 before Maryville answered with a 3-pointer with 12 seconds left to trail 59-57.

Conner Bowman tacked on another Panther free throw with 10 seconds left to make it 60-57. The Rebels got a 3-point attempt off at the buzzer that fell short, preserving Stone Memorial’s season-opening win.

The Panthers and Lady Panthers will take the floor next in Johnson City Saturday for two hall-of-fame games against Jefferson City and Morristown West (girls) and Science Hill (boys).