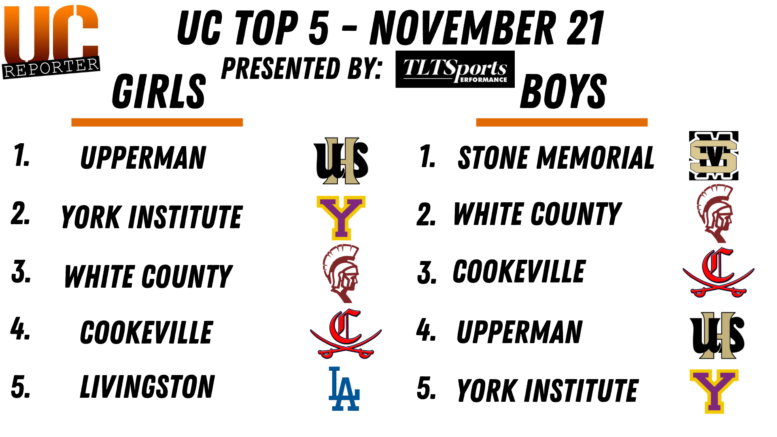 Please note this list is 100% opinion-based, and will change throughout the season.

Week one of the high school basketball season is in the books, and there were some interesting games last week. We still do not have clarity on a lot of questions we had entering the season, but there is some movement on this week’s list!

The reigning class AAA state champions opened the season 2-0 with a nice win over Class AAAA Oakland and then a blowout over Lakeway Christian.  The Lady Bees’ defense appears to have picked up where it left off last year, allowing 83 points in two games. One interesting thing to watch will be the newcomers for UHS. Taylor Dolente appears to be capable of turning the pair of Abigail Johnson and Jayla Cobb into a big three. Lady Bees stay on top.

It was a strong opening week for the Dragonettes as they went 3-0. The most impressive win of the week was a 47-19 win over a Warren County team that we expect to be competitive this year. There are very few weaknesses on this Dragonettes team, and a quick look at the schedule will show you this is a team that will stack a lot of W’s this year.

The Warriorettes move up a spot with a 3-0 opening week. Celeste Reed and Nia Powers each had good weeks and the Warriorettes defeated three teams who are all strong. If they can continue to get strong guard play to go along with their dominant size, Sparta will win a bunch of games.

The Lady Cavs drop a spot, and are the only team on the girls’ list with a loss, but losing on the road to Blackman is not a bad loss. They followed it up with a road win in overtime over a talented Lady Jets squad. There are some things to work out for CHS given the roster turnover from last year, but as the young freshmen become more comfortable, this is a team we expect to find its stride.

The Lady Wildcats are the only newcomer to either list, and they earned the spot with a 2-0 day at the Clarkrange playday with wins over Hendersonville and Clarkrange. Ellie Butler had a strong Saturday and considering what she did in her freshman season she could be in line for a huge year. The Lady Wildcats may be here to stay.

The Panthers hold on to the top spot after a strong 3-0 week including wins over three Class AAAA schools. This is a balanced, talented Panthers squad who will get a big test on Tuesday night when they travel to Cookeville in a game that could be for the top spot in the top 5.

Speaking of impressive weeks, the Warriors went 2-0 on Saturday with dominant wins over Meigs County and Tullahoma. They have a big week ahead with Shelbyville as an appetizer before their rivalry matchup against Warren County, but the Warriors are favorites in both games. They did exactly what you would expect a team who returns all five starters to do.

The Cavaliers dominated Cumberland County in their only game last week. CHS is as athletic as any team in the UC, and we are very excited to watch their matchup against Stone Memorial on Tuesday night.

The Bees move up a spot despite not taking the floor, mainly because of what happened elsewhere. We will finally get a look at this squad on Friday and Saturday in Lebanon.

Reserve all judgment on the Dragons. With the amount of players still playing on the football team, it is impossible to gauge how strong this team is. They could easily launch back up this list once they get their roster intact.