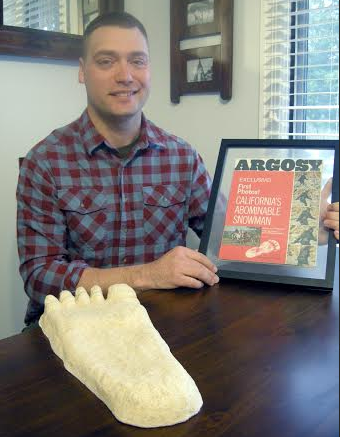 Learn about the legend of Bigfoot at Nature Fest

COOKEVILLE – Could there really be a wild, man-like creature living in the woods, alluding civilization for centuries? And if not, what are all these people who claim to have seen “Bigfoot” really seeing?

It’s something Jason Miller has been thinking about since he watched an episode of the TV show “Unsolved Mysteries” on the topic when he was just a kid.

“Of course I had heard of Bigfoot before that, but it was always just a monster,” Miller said. “I never realized that it was something people believed to be a real thing.”

Bigfoot is something that some people believe to be real and they have the stories to prove it, they say. These stories of Bigfoot interest Miller, who has made a hobby of reviewing literature and media covering those stories and examining how tales of Bigfoot have become such a cultural phenomenon over the last century.

“It has never been more popular than it is now,” he said, citing popular TV shows that examine the existence of the storied creature. “Although I have always been interested in it, the last few years I have really started digging in to looking at where this is coming from and why people are still pursuing this.

“It is 2015. We have just about logged every forest in North America. How can people still think that this is a genuine thing?”

Despite the fact that many Bigfoot sighting have ultimately been determined to be misidentification or just creative storytelling, the fact that people continue to come forward with Bigfoot stories makes the legend especially interesting for Miller.

“I think what makes it still a mystery is all of the people who claim to have seen these things,” he said. “Even when you take a skeptical approach, it is still a legitimate mystery. What are all of these people seeing?”

Miller has a biology degree from Tennessee Tech and works as a Park Ranger at Burgess Falls State Park. His interest in Bigfoot, he says, is just a hobby and though he has spent plenty of time in the woods, he makes no claims of having any actual sighting or experiences of his own. In recent years, he has read every book and news article about the phenomenon that he could find in his spare time.

On Saturday, April 18 at 7:45 p.m. in Tennessee Tech’s Pennebaker Hall, he will share what he has learned as part of Nature Fest, an annual celebration of the outdoors at TTU’s Pennebaker Hall, City Lake Natural Area, Cane Creek Park, and other locations of interest in the Cookeville area.

The presentation is one of many fascinating talks, demonstrations and hands-on activities that are part of the four-day event with sessions scheduled beginning at 6:30 p.m. Thursday, April 16; at 4 p.m. Friday, April 17; throughout the day on Saturday, April 18; and from 1:30 p.m. on Sunday, April 19.

Stand Up For Recovery Conference