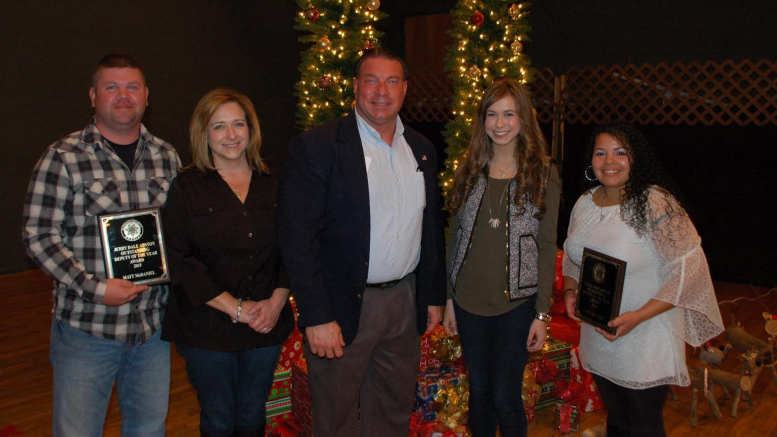 PUTNAM COUNTY, TN – The Putnam County Sheriff’s Office is pleased to announce that it has honored two if its top deputies with the Jerry Dale Abston Deputy of the Year award.

This distinguished honor is awarded annually to one deputy in each category – commissioned and non-commissioned – for outstanding professionalism, dedication and commitment to the core values of the Sheriff’s Office. This year’s winners are Deputy Matt McDaniel (commissioned) and Deputy Erica Hacker (non-commissioned).“I am pleased to announce the winners of this year’s Jerry Dale Abston Deputy of the Year Award,” said Sheriff

Eddie Farris. “I am so proud of all of the accomplishments of the men and women of the Sheriff’s Office. It was a difficult choice because there were many qualified candidates.  I want to congratulate Matt and Erica for their distinguished service to our Department this year!”

Deputy Matt McDaniel was selected for his outstanding dedication in tracking and locating a suspect in a stabbing incident that took place on April 15, 2015 on Jones Road in Putnam County. Deputy McDaniel was instrumental in closing the case and has performed his duties admirably. He has also led the Department in warrants served 7 out of the 9 months of this administration. He is a model employee and his actions on April 17 went above and beyond the call of duty.

Deputy Erica Hacker was selected for her commitment and dedication to the success of the new female work crew program at the Putnam County Jail this year. She routinely exhibits a superior level of professionalism on the job, often going above and beyond her responsibilities in order to meet the needs of the Department. She rearranges her schedule, even coming in on weekends, and comes in to take transports as needed. She is an exemplary employee who embodies the core values of the Putnam County Sheriff’s Office.

“It is an honor for me to serve as the Sheriff of Putnam County,” added Farris. “I am especially honored to lead this amazing group of men and women who are so dedicated to the work they do and the people they protect here in our community. I am humbled every day by their selfless service and I look forward to recognizing them in this way.”