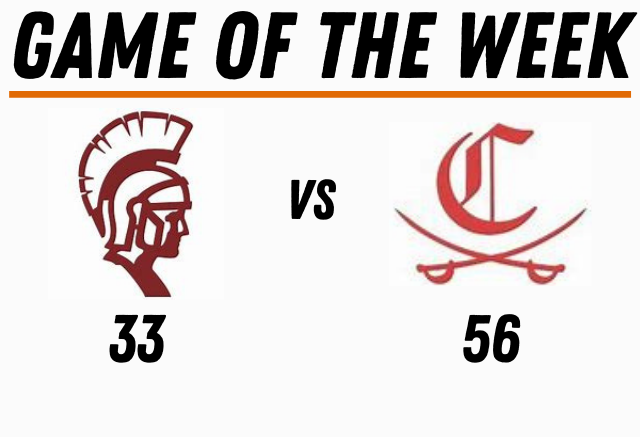 The Cookeville Cavaliers got back into the win column with a 56-33 win over rival White County in the High School Football Game of the Week on Friday night in Cookeville.

The Cavs (3-1, 0-1) survived a furious comeback attempt by the Warriors (1-2) as CHS tallied 21 fourth quarter points to pull away late and secure the win.

“Offensively, a pretty good night. Defensively, we couldn’t tackle (Malaki Dowell),” said CHS head coach Jimmy Maynord. “I don’t know if I’ve ever experienced that before. Just one guy almost beat you single-handedly. They’ve got some good players. I knew that coming into the game. My grandson is a junior on the team. They’ve got kids that can run and they’re physical kids. They’ve got a good football team.”

The Cavs led 35-14 in the first half, but sophomore WCHS quarterback Dowell led his team back to within two in the third quarter before the Cavs put the game away.

“Offensively, we played spectacularly,” said WCHS head coach Mark Frasier. “Malaki Dowell was spectacular. The offensive line played really well. Defensively, we didn’t do very well as far as stopping them. I will say this, they played hard. I’m proud of them. We’re playing an offensive line that outweighs us by 40-50 pounds across the board and an athlete that may be the best in the Upper Cumberland running around back there.”

The game featured a battle between two prolific quarterbacks in Dowell and Cookeville’s senior Stockton Owen, and each turned in strong performances.

Dowell finished with 297 yards and four touchdowns on 18 carries. He added 44 yards through the air in his fourth start at quarterback.

“He’s a great football player regardless of what grade he’s in,” said Maynord.

The Cavs raced out to a 21-7 lead early in the second quarter, but Dowell tallied his second touchdown of the game, this one from 79-yards out to cut the deficit to 21-14. The Cavs immediately responded with a 53-yard touchdown pass from Owen to Waylon Whited and a 30-yard TD rush by Owen to stretch the lead to 35-14.

White County proved they would be competitive as they rallied with three straight rushing touchdowns, two by Dowell and one by Kade Clark as they cut the CHS lead to 35-33.

The Cavs then showed their experience and depth as Owen capped a seven-play, 66-yard drive with a three-yard touchdown rush to stretch the lead to 42-33.

The Warriors had an opportunity to cut into the deficit when Frasier elected to attempt a 36-yard field goal with 4:39 remaining, but the kick was no good. Senior CHS tailback Logan Sides rattled two rushing touchdowns in the final moments as the Cavs secured the 56-33 win.

Owen thrived in the passing attack going 14-17 for 192 yards and a touchdown.

“(White County) stacked the box.” said Maynord. “They’re a 4-3 team and they stacked the box and blitzed a lot, so it makes it hard to run the ball up inside. We felt like we needed to spread the ball around in the passing game.”

Owen also rushed for 158 yards and four touchdowns on 15 carries.

The Warriors will now prepare for a road trip to Cleveland to take on Walker Valley (1-2). Kickoff between Sparta and the Mustangs is set for 7:30 p.m.

The Cavs will now turn their attention towards a Region 3/6A matchup with the number one ranked team in the state, Oakland (4-0)

“We’ve got to get a whole lot better defensively,” said Maynord. “Giving up 33 points is not good. We’ll keep working and hopefully get better.”

Kickoff between the Cavs and the Patriots is set for 7 p.m. in Murfreesboro.