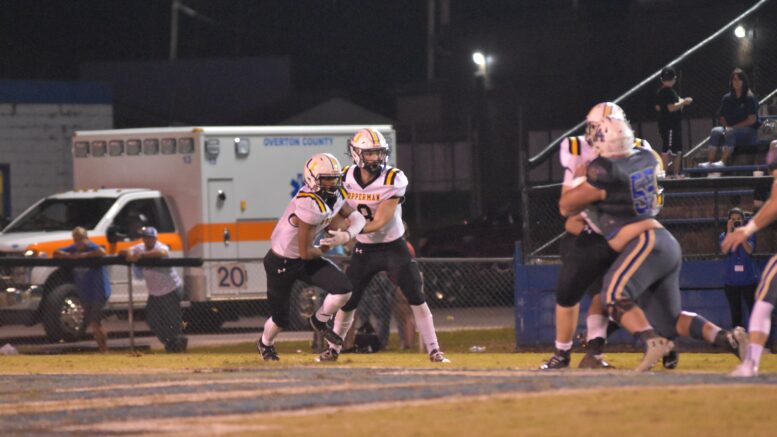 The Upperman Bees are looking to bounce back as they prepare for a Region 4/3A matchup against Cannon County.

The Bees (2-2, 1-0) are searching for a spark in the wake of a 21-14 loss against rival Livingston Academy in which they turned the football over five times. UHS head coach Adam Caine said the Lions (0-4) are a team that has an edge.

“They really play with an edge,” said Caine. “I think they’re pretty aggressive. They’ve got some running backs with good speed. It looks to me like there’s some talent there. I’m kind of dealing with a team of my own that doesn’t play with much of an edge, and that’s kind of a focus and a concern for us right now. (Cannon County) has a lot of fight in them.”

The Upperman offense struggled at times against Livingston in week four. The team had more turnovers than pass completions and struggled to find a rhythm. Caine said his staff is looking at several factors to get the team moving in the right direction.

“Without question,” said Caine. “Our team right now is at a point where we’re making some serious evaluations and decisions, from a personnel standpoint. Guys work hard in practice and they deserve an opportunity. Right now, the production on Friday night’s is what we’re looking for. We’ve got to make sure we give everyone an opportunity to show they can produce, and if not, we’re moving forward.”

Caine said despite his concerns, he does believe his team can play good football.

“I do think this team is very capable of playing good football,” said Caine. “Right now, there’s some areas of concern that need to be addressed this week. Hopefully, we can address them, and questions get answered and guys start playing to their capability.”

Upperman has dominated the series against Cannon County, winning the last nine matchups between the two schools. UHS topped the Lions 39-6 in 2019. The Lions have also struggled in their first four games,

Caine said he expects the Lions to show up ready to turn the tide of the series, as teams usually give the two-time defending region champion Bees their best shot.

“I think there’s a little blood in the water feeling,” said Caine. “(Opponents may be thinking) this is the year to get Upperman. I always try to be very honest with (my team). We are a 2-2 football team who has at times played well and at times played very poorly. I think we’re a true enigma. I don’t think anyone knows, including the head coach, who we are as a team and where we’re going as a team.”

The Bees will have a chance to make a statement Friday night as they try to move their record to 3-2 and remain undefeated in Region 4/3A play. The Bees have won 13 region games in a row dating back to 2017.

Kickoff between the Bees and the Lions is set for 7 p.m. in Baxter.