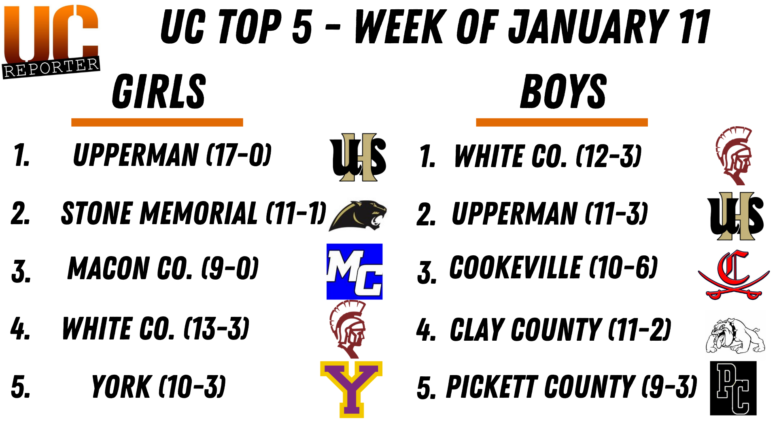 We are into 2021, and the high school basketball season is in full swing. We will be releasing a weekly list of the top girls’ and boys’ basketball teams in the Upper Cumberland, according to our own Noah McKay.

Note: Numbers 2-4 are extremely close. All five teams on this list have a legitimate shot at winning a state championship in their classifications. In order to come up with a fair list, I took three things into account: Best wins, worst loss(es), and consistency.

Another week of dominance out of the Lady Bees. Three blowout district wins over Livingston, Watertown and Smith County. The question I have for Upperman right now is: Can they sweep Macon County and go undefeated, or will the Tigerettes continue their winning streak over UHS?

I got a lot of comments last week about having Stone at 5, fair enough. The Lady Panthers move up this week after a blowout win over Cleveland and another win over a quickly-improving Cumberland County squad. They get the nod over MCHS and WCHS this week because of their four notable wins, and 11 game winning streak.

A 27-point win over Smith County helps keep the Tigerettes at 3. They’ve got a good resume with an undefeated record and four notable wins. They’ll get a great test on Tuesday against a red-hot York team that has won five in a row.

The Warriorettes did not fall because of a loss against a great Coffee County team. They are behind SMHS and MCHS due to having three notable wins, compared to four. The York loss looks better by the day, as the Dragonettes are surging.

White County’s best asset? The eye test. They have multiple ways to beat you and are a nightmare to matchup with. Expect a war at the top of District 6/AAA between the Warriorettes, Stone Memorial and Cookeville

Welcome to the top-5, York Dragonettes. Five wins in a row, including a 44-42 win over Cookeville grabbed everyone’s attention. Any team with Haylee Johnson on the roster poses a threat, but the Dragonettes also boast a strong supporting cast. They’ll have an opportunity to rocket up the rankings if they can knock off Macon County on Tuesday night in Jamestown.

The Warriors took care of business against Coffee County to sweep the season series. They still deserve the top spot in the rankings. I’ll be keeping a close eye on their matchup with Cookeville on Friday night.

Here come the Bees. Collin Gore has raised his game to another level in the absence on Isaiah Allen, and Alex Rush has continued his consistent play. Three district wins in one week leaves Upperman at number two. When Allen gets back, watch out.

The Cavs have now won five in a row, and took care of business against York and Mt. Juliet. If they have found the level of consistency they have been searching for, they could become a very dangerous team come tournament time.

The Bulldogs have won four in a row, including a nice 19-point district win over Pickett County. They had their opportunity for a state championship taken away from them last season, but they appear to be on a mission to return to Murfreesboro this year.

The Bobcats had a tough loss against Clay County, but also had a 14-point win over last week’s number five, Livingston Academy. District 6/A has no shortage of talented teams, but Clay and Pickett each have an opportunity to make serious noise in February and March.