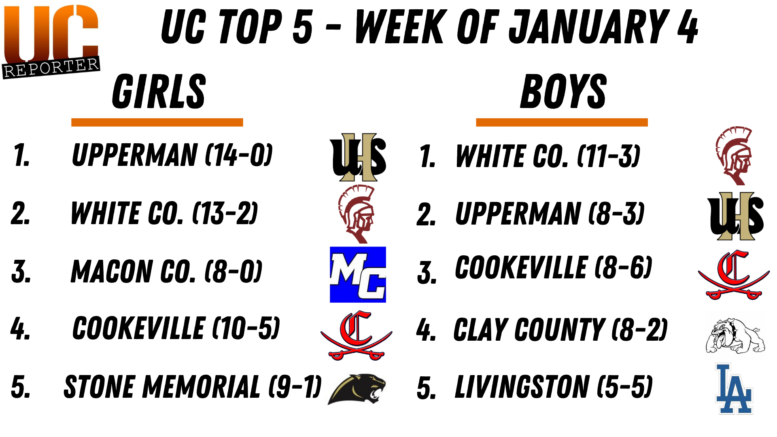 We are into 2021, and the high school basketball season is in full swing. We will be releasing a weekly list of the top girls’ and boys’ basketball teams in the Upper Cumberland, according to our own Noah McKay.

The lists are 100% opinion. They are based off a variety of factors including performance on the court, schedule difficulty, the eye test along with many others. Ties are broken by who I think would have the best chance of winning on a neutral court.

We figured the Lady Bees had the potential to be great following a final four appearance in 2019 and returning all but one key player from that team, but UHS has been dominant.

14 wins to open the season, all but one by double-digits, and convincing victories over powerhouses Bradley Central and Loretto. Find a girls’ team in the state playing better basketball and I’ll be surprised.

The Warriorettes appear to have found a rhythm. After stumbling against York in the Sonic Shootout, they’ve rattled off five straight wins, including a tournament championship in the Visit Panama City Beach Marlin Christmas Classic.

Sparta can beat you in several ways. Everyone knows the three ball with Gracie Dodgen and Morgan Quick, but the emergence of Celeste Reed and Nia Powers is what makes the Warriorettes especially dangerous.

The Tigerettes are off to another fast start, and find themselves in the middle of the longest winning streak in program history. Jalynn Gregory has taken her game to another level and has MCHS poised to contend in AA again.

Why are they behind White County and Upperman? I have questions about their ability to beat teams when Gregory is slowed down. Right now, it looks like UHS and WCHS have more ways to beat opponents. The Tigerettes’ matchup with Upperman on January 19 will tell us a lot about who the top dog in AA is.

The Lady Cavs would’ve been number three on this list, but a late comeback by Macon County gives the Tigerettes the edge.

The emergence of Cassie Gallagher has been one of the top stories to watch in the UC. The sophomore has shown an ability to drop 18 points a night while also playing lock-down defense. When CHS is firing on all cylinders, they can beat anyone in the state (Example: Lebanon game), but when they slump they can be beaten (Example: MCHS and Baylor games).

If they get hot come tournament time, watch out.

Belmont signee Tessa Miller is one of the top players in the state, and has her team off to a fast start through 10 games. Much like Sparta and Cookeville, the Lady Panthers are a team you do not want to play if they are firing on all cylinders.

Why are they behind Cookeville? Cookeville has four more losses, but have played a tougher schedule, in my opinion. Much like MCHS vs UHS, I believe CHS has more ways to beat you, but that could change when they face off.

University of Mississippi signee Grant Slatten has been on another level through 14 games, and he has his Warriors out to a strong start. They’ve had two head-scratching losses against Wilson Central and McMinn County, but Slatten gives them an ability to win any game they play in. They are the top dogs in the Upper Cumberland to start 2021.

It hasn’t been the dominant start many expected out of the Bees to start the season, but they’ve battled injuries and other absences and yet find themselves at 8-3. When healthy, they boast a strong, senior-laden starting five that appears to be the class of District 8/AA. The question is, do they have the depth to compete with AA’s top teams? We will find out soon.

This Cavs’ team is a year or two away from being an absolute powerhouse. 11 freshmen on the roster has led to some inconsistent play, but Colin Ayers and Josh Heard have been as good as advertised. They’ve had narrow character-building losses against teams like Siegel and Buford (GA), but they’ve had some nice wins as well. Their matchups against White County will be very interesting to watch.

The Bulldogs put everyone on notice with a 67-51 win at Livingston on Saturday night. Grant Strong is one of the top players in the state, and he is leading his Bulldogs to a strong start. We will quickly figure out if they’ll be challenged in the district when they take on Pickett County on Friday night in Celina.

There’s a couple of teams that could’ve found themselves in this spot, but it goes to the Wildcats this week. Matthew Sells is the real deal, and the Wildcats are the type of team that can scare teams on any given night. I’ll be watching LA closely early this week as they take on Pickett County and district-favorite Upperman.