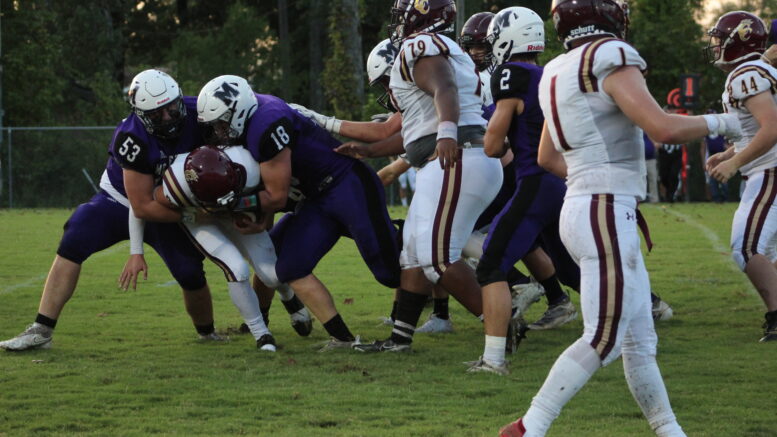 The Monterey Wildcats suffered their first defeat of the season on Friday in a 7-6 loss to 4A foe Stone Memorial.

Despite the outcome, head coach Scott Hughes says there were plenty of positives to take away from in his team’s performance.

“I was very proud of the effort our young men gave, and they gave us a chance,” Hughes said. “It’s one of those things where we just have to clean up some things on our end. At the end of the day when your kids play as hard as they did and you’ve got a shot against a 4A school, it’s nothing to hang your head over.”

The defense was highlighted specifically, as they once again gave the Wildcats every chance to win the game. For the fourth consecutive game, they gave up a single score and even on that play, the secondary defended the receiver about as well as they could have in Hughes’ eyes.

This wraps up a stretch for Monterey that saw them face three teams in bigger classifications in four weeks, and like he said before the season, Hughes believes this schedule prepared his players for region play against teams are similarly sized compared to the Wildcats.

“I thought I was crazy at one time with what I scheduled,” Hughes said. “You’re not going to see as much speed or size (in our region)…we’ve tried to put our young men in as many competitive environments as we could in hopes that it would slow the game down in region play. Seeing the speed and size and how to handle it, we don’t know the future, but hopefully it’ll pay off for us.”

The Wildcats’ week five matchup pits them against new region opponent Rockwood. The Tigers come into this game with a 1-2 record after losses to Sweetwater and Kingston, but Hughes sees this team as one of the biggest contenders in the region.

When asked what sticks out on film, Hughes says its the team-speed and physicality in the trenches that Monterey will have to prepare for.

“It’s a very historic, traditional football power,” Hughes said. “They’ve got some good speed when you look at their receivers. Their tailback is a big bruising kid, and their quarterback is a very good athlete. They’re very big up front and they’re very sound in what they do…you can tell with everything, it’s definitive what they are trying to accomplish. That’s a testament to their coaches.”

The two teams will battle it out on Friday at 7:30 P.M. EST. The game will be live-streamed on Upper Cumberland Reporter 4 on Facebook.