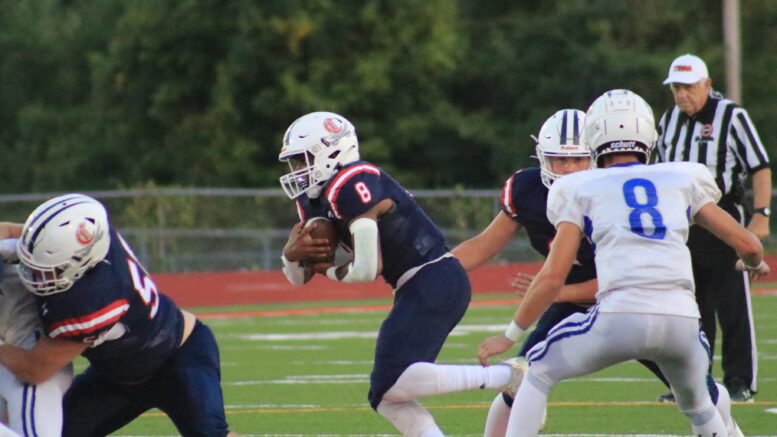 The Cookeville Cavaliers showed a lot of improvement in their week three game against Lebanon, but if you ask head coach Jimmy Maynord about it now, he’ll tell you he feels like a lot of that was undone against White County on Friday.

The Cavaliers fell to the Warriors for the first time since 2013 by a final score of 41-13, a game that Maynord says there weren’t very many positives to draw from.

“We didn’t tackle very well, we gave up a lot of big plays on runs,” Maynord said. “On the offensive side, we didn’t block very well. If you’re going to win football games, you have to do good in those two areas, and we didn’t do very well in either one of them.”

Discipline is something Maynord is focusing on this week, as the Cavaliers committed multiple personal fouls thoughout Friday’s game. Senior Waylon Whited was ejected in the first half, leaving Cookeville without one of their best playmakers.

“I’m very disappointed about the lack of discipline this football team has at times,” Maynord said. “It’s been a point of interest. I’m embarrassed that we can’t behave and that we get unsportsmanlike conduct penalties for pushing people and talking to the officials…as a coach, all you can do is emphasize it and punish kids when they do stuff wrong. They have to take ownership of it and correct it themselves.”

The game was a microcosm of the season thus far for Maynord, as the Cavaliers have looked really impressive at times and have shown their age and lack of experience at others. As far as what they’ve improved on the most from week one to now, Maynard says the jury is still out on what that could be.

“There’s times where we make plays, but then we make penalties,” Maynord said. “There’s things we still have to eliminate, and the discipline part is really big. Until you become a disciplined football team, you’re going to struggle.”

The Cavaliers are set to face Warren County this week, a team that’s only played one game in last week’s 38-20 loss to MT. Juliet. Last season, the Pioneers defeated Cookeville 24-0 on the strength of an excellent performance from 6A Mr. Football winner C.J. Taylor.

For Maynord, the toughest part of preparing for Warren County is prepping for their Wing-T style offense.

“They played really well against a really good MT. Juliet team,” Maynord said. ” They’re a Wing-T team, and that’s something that’s really hard to prepare for in a week’s time…they’ve got speed with their skill kids. I don’t know where all those lineman come from, but they’ve got some good lineman.”

The Cavaliers and Pioneers face off this Friday at 7 P.M. The game will be live-streamed on Upper Cumberland Reporter 3 on Facebook.