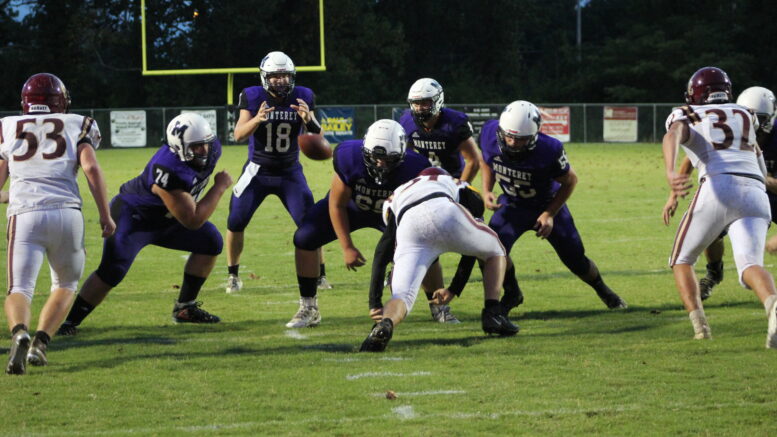 The math was incredibly simple for the Monterey Wildcats in week nine.

Defeat Oneida, and you earn the region championship, which would’ve been a great achievement for Monterey after stepping up into a new classification this year.

The problem is they didn’t defeat Oneida. The Indians hit on two notable big plays for touchdowns and despite a late push from Monterey and an near-fumble on an onside-kick, they managed to eke out the win and muddle the region championship picture.

Now as far as the region coming down to the season’s final weeks, is any of this a surprise to Monterey head coach Scott Hughes? Absolutely not.

“I’m not surprised at all, because when you’ve got good football programs, it’s no surprise at all that you get a logjam,” Hughes said. “You’ve got football teams that are all a bit different, and they’re all great environments to go play in. It’s one of those things that one night can slip up and bite you in the hind end, and for us unfortunately, our worst night of the year was in the biggest spot of the year.”

The way the standings shape up, here’s the situation. Monterey beat Rockwood, Rockwood beat Oneida and now Oneida’s beaten Monterey. The one plus to the situation is that while the Indians have wrapped up their region slate, Rockwood still has a home game to play against York Institute in the final week of the season.

In an ideal world, the Dragons would win that game and give Monterey sole possession of second place, provided the Wildcats take care of business against Wartburg that same week. If York doesn’t defeat Rockwood, then the Wildcats are likely looking at third-place finish once all tiebreakers are accounted for.

That means a road playoff game against the second-place team from the other region.

Let’s say the second scenario happens and Rockwood beats York, it would come down to total wins. Because the Tennessee Heat are not a TSSAA-affiliated team, Monterey would be left with six total wins, if they win out, while Rockwood would end with seven if they win their final two games.

Make no mistake, the Wildcats played up multiple classifications against teams like Stone Memorial, Cumberland County and Waverly. As odd as it may seem, it would come down to the Tennessee Heat game in a tiebreaker.

“Maybe we didn’t do ourselves by the schedule that we played,” Hughes said. “I think our schedule speaks for itself…we had a bye week and could’ve taken a week, but we played (Waverly). The one game that could turn it is when we played the Tennessee Heat. I struggled in the offseason to find a game that week, and they were open to play us. It was either take that football game or go to one of the larger private schools. We took a game that was closer to home.”

Regardless of how this entire situation shakes up, Monterey fans shouldn’t be worried. This team is more than capable, if it has to, of going on the road and knocking off another 2A school. What this situation should prove to people is that this region is nowhere near the one-horse race many outside of the Upper Cumberland assumed it was.

It’s a multi-team race, and it’s going to be an exciting finish  that comes down to the very end to decide the standings.

“I knew going in that York was a great football team,” Hughes said. “You know the success rate and history of both Oneida and Rockwood. Wartburg is a team that played Oneida to a 7-0 game…it’s a challenge. You have to be really good every night.”