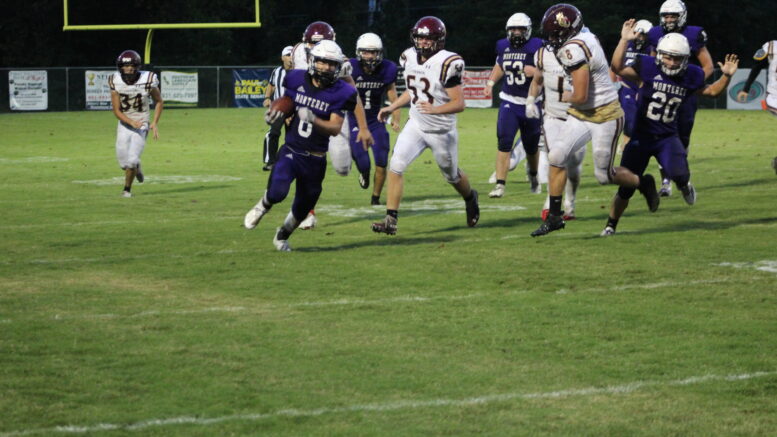 The Monterey Wildcats find themselves at 5-4 heading into the last week of the season, and first-place in the region is all, but out of reach.

Week 10 saw them fall in a tough, physical game to Bledsoe County 28-21, a game in which head coach Scott Hughes says he feels like his team just made too many mental mistakes to win.

“We just keep shooting ourselves in the foot, and when you play good teams, you’ve got to play a clean game,” Hughes said. “We were telling our kids what was going to happen before it happened, and we just mentally busted…we’re sitting here with five wins, and we’re 20 points away from being undefeated.”

Early in the season when teams are still finding their groove, there’s a case for this game being somewhat of a moral victory since the errors couldn’t really be attributed to effort issues.

At this point in the season when every game matters just a little more than the last, Hughes is the first one to say there are no moral victories.

“This time of the year, there are no silver linings,” Hughes said. “When you have had a little bit of success, there are no moral victories. You can sell that how you want, and there are situations where you talk about that, but we aren’t talking about that. We’re not giving everyone a prize because they participated, and our guys are having to face that reality right now.”

The region championship picture is relatively simple, as if Rockwood and Monterey both win their games, there will be a three-way tie at the top of the standings with Oneida. Since the Wildcats beat Rockwood, Rockwood beat Oneida and Oneida topped Monterey, the tiebreaker would be in total victories.

Since the Tennessee Heat are not a TSSAA-affiliated program, that would leave Monterey with, at most, six wins on the year, while Oneida and Rockwood would each end with seven. One key for Monterey this week would simply be focusing on what you can control and taking care of business, thereby avoiding the trap of scoreboard watching.

“We talked about that three weeks ago before we played Oneida,” Hughes said. “The one part that we have talked about is that we have to win to have a shot to host. If we lose this game, none of the rest of it matters…where we’re at in the standings is a three-way tie for first.”

The regular season finale against Wartburg presents a chance for the Wildcats to finish 3-1. The Bulldogs are eliminated from the playoff race, as they lost to York Institute earlier in the season, meaning even if the Dragons lose, they would hold the tiebreaker.

As far as what sticks out to Hughes about Wartburg, he only needed one bit of information before he knew this would be a tough game.

“Oneida beat them 7-0 and they scored with like 46 seconds to play in the game, so that’s all I needed to know,” Hughes said. “You’ll see some tempo, no-huddle, and then you’ll see them jump in some two-back, tight-end formations…on defense, they’re going to try to stop the run game. They’re going to load the box on us, so we’ve got to be efficient in what we do.”

The two teams are still set to square off on Friday at 7 P.M. The game will be live-streamed on the Upper Cumberland Reporter Facebook page.