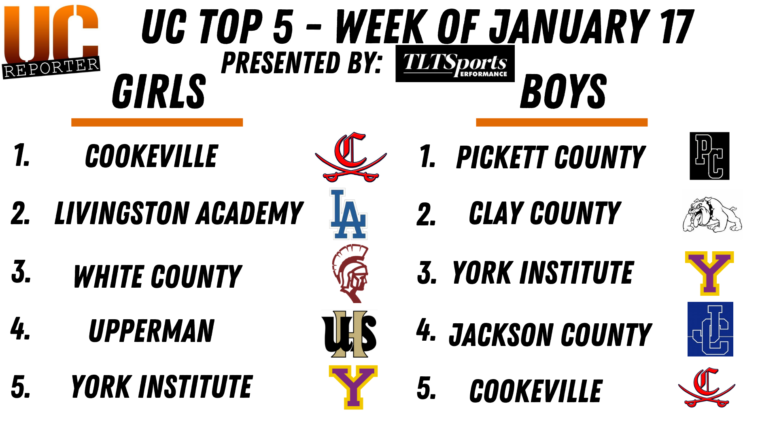 If you like chaos in this list, you’ll love this week. Last week saw some great high school basketball. Close games between bitter rivals, and signature wins by dominant teams.

The girls’ list saw movement for the first time in several weeks, and the boys’ list continues to shuffle as some teams impress and others suffer tough losses.

Without further ado, let’s get to the UC Top-5 presented by TLTSports Performance.

Throughout Livingston’s season, we all had our eyes directly on last week. At White County on Tuesday and hosting Upperman on Friday would provide the test Livingston needed to pass to prove they were a contender. After that week, not only are they a contender, they may be the favorite in Class AAA (with a tip of the hat directed at Page).

The Lady Wildcats ability to remain calm under pressure and earn two huge district wins cannot be understated, and they were able to show off the versatility of Leslie Riddle’s squad.

The Warriorettes lost Alaina Stiles in the first quarter of their matchup against Livingston, and you can’t assess the game without taking it into account. Would they have won the game? Maybe, maybe not, but it was a factor.

They bounced back with a blowout over Macon County in Lafayette and taking care of business against Van Buren County.

Their lack of top-end guard play is a weakness that great teams like Livingston, Cookeville, Warren County and Upperman can exploit, but they are still a huge threat by nature of their dominant post game.

The gap between White County and Upperman is razor thin, and their matchup in Sparta on Friday is a battle to stay right atop the race for first in the district, and third in the UC Top 5.

Brooklyn Crouch and Abigail Johnson did everything they could to knock off Livingston, but the lack of secondary scoring came back to haunt the Lady Bees.

If players like Emma Conradi and Bella Mullins can join the scoring on a routine basis, the Lady Bees can beat anyone in the state.

The Dragonettes rolled past Oneida and Jackson County to improve to 10-4 on the season. Outside of non-district matchups against Rossview, Clay County and Pickett County, it sure appears like York is about to steamroll through the final month of the season. They should have a lot of momentum entering the postseason.

The number one ranked single-A team in the state is on a seven game winning streak, including two blowout wins last week. The whole season has been building towards Tuesday night when they travel to Celina to take on Clay County. Can they knock off the reigning champs? If they can, they’ll have a stranglehold on the top spot.

The Bulldogs are quickly ascending the rankings once again. Our preseason number one went 2-0 last week, and will return to the top spot if they can knock off Pickett County on Tuesday at home. Grant Strong gives them a chance in every game, the question is if the rest of the team will rise to the occasion.

The Dragons quietly got one of the biggest wins of the season when they went to Gainesboro to knock off Jackson County. The win puts them in the driver’s seat in District 5/AA, and if they can sweep the season series they should have no problem winning the district. At 12-6, Rodney Pile’s squad is starting to put together an impressive year.

The Blue Devils dropped their matchup against York, but they’ve still won nine out of their last 11 games and are a threat in District 5/AA. The Blue Devils do everything well, they simply moved down the list this week by nature of the loss on Friday night.

Several teams could’ve taken the fifth spot, with Stone Memorial being very close, but the Cavs dropped two narrow games against good 4A squads, and the strength of schedule must be taken into account. If CHS can get a bit stronger in the final minutes of games, they’ll be a threat to any team in the district. They still feel like a team that hasn’t hit their ceiling, but time is running out to get there. DJ Potts-Heard and Josh Heard are playing great basketball.