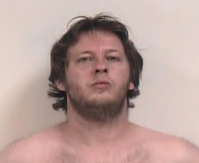 “I am extremely proud of the swift response from both of our Departments,” said Sheriff Eddie Farris. “We have practiced similar scenarios with our law enforcement partners and it clearly paid off during this incident. We were able to quickly apprehend the subject and, most importantly, keep our students and teachers safe. As I have said before, there is nothing more important than the safety of our children and we will take a hard line on anyone who attempts to endanger our students.”

On August 5, 2015, at approximately 8:46 a.m., Robert Barefield called 911 to report an altercation with his grandson, Kyle Barefield. He reported that Kyle had assaulted him and then stolen his car and left the premises. Based on information obtained from a later call at approximately 9:04 a.m., it was assumed that Kyle was headed toward Capshaw Elementary.

“The quick thinking and pre-planning of the Sheriff’s Department, City Police and Capshaw School diffused what could have been a disastrous situation,” said Randy Porter. “We are so fortunate in our County to have great law enforcement agencies that work and train together for situations like these. I am relieved that yesterday’s incident was concluded without any harm to our students or teachers.”

The school was immediately put on lockdown and Putnam County deputies searched inside the school as Cookeville Police Department officers set up an outside perimeter. Deputies were informed that Kyle Barefield gained access to the building and refused to sign in at the office. When a school employee confronted Kyle, he threatened the employee and continued toward the student classroom. Deputies were also given Kyle Barefield’s description.

At approximately 9:22 a.m., Cookeville Police Officer Ethan Ross and PCSO Deputy Gary Davis captured Barefield as he fled the school building during the search. He was taken into custody without incident.

“The Cookeville Police Department, the Putnam County Sheriff’s Office, the Emergency Management Agency, the Putnam County School System and many others have made a concerted effort to improve and provide additional security to our school system. I am very pleased that our training and efforts paid off today,” said Chief Randy Evans, Cookeville Police Department. “The immediate and very appropriate response of school personnel and the rapid and equally appropriate response by law enforcement diverted a very real threat and possible tragedy. I want to reassure our community that the safety of our children is one of our top priorities.”

“I applaud the deputies of the Putnam County Sheriff’s Department and the officers of the Cookeville City Police Department for their quick work to apprehend the individual, to keep our children safe and to prevent a potential tragedy. I’m also thankful for the Capshaw staff and teachers who acted quickly and decisively to protect our children,” said Mayor Ricky Shelton.

Major Terry Hembree and Detective Roger Cooper are continuing to investigate this incident. If anyone has additional information regarding this incident, please contact the Putnam County Sheriff’s Office at (931) 528-8484.

WCTE to be Recipient of Craft Brew Fundraiser