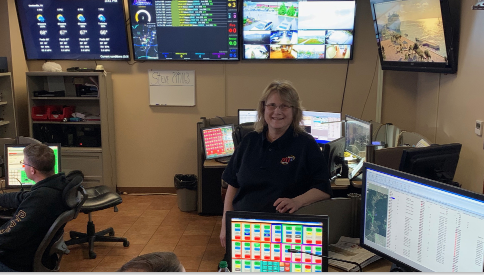 PUTNAM COUNTY, TENN – At the October meeting of the Putnam County 911 Board, Board Chairman Bob Duncan entertained a motion to name Penny Foister as Putnam County’s 911 director. Board members present for the meeting voted unanimously to approve Foister as the next head of the agency.

The change comes six months after an interim period was established by the Board, and comes following a request from previous Director Mike Thompson to take a step back to assistant director. Thompson, who has served Putnam County Emergency Services for over three decades, noted the change was necessary for personal reasons. “After talking with my family, this was the best decision for me at this time. I am confident Penny will serve the agency and our citizens well,” Thompson explained.

The 911 Board accepted Thompson’s request and began discussions internally to name the next director. Foister discussed her interest in the position with County Mayor Randy Porter, and Board Chairman Duncan, and they began a six-month period as interim director, giving Foister the opportunity to perform the functions of the job, while learning the needs from Thompson.

“I believe in promoting from within, wherever possible. We have been fortunate that Penny has been with 911 for many years, most recently as one of the department’s assistant directors. She already had a good grasp on 911 and the needs of the department and its employees.” Discussed Mayor Porter. “She has done really well in the interim period and we felt like she was ready,” he continued.

Foister, when asked about her new position, remarked, “I am humbled by the Board and Mayor Porter’s faith in me. I have worked with Mayor Porter since the 1990s, and to know he has the faith in me to carry on such an important part of our community is just humbling.”

Porter, who served as the first director of Putnam County 911, when 911 services first came to Putnam County, knows the agency very well. “911 is very near and dear to me, and I want to make sure it, like all of our agencies, thrive and serve our community to the best of their abilities. I have confidence that Penny will do that well,” concluded Porter.