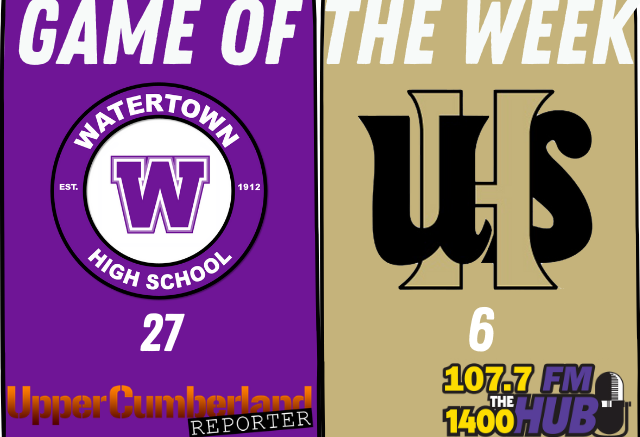 WATERTOWN, TN- The Upperman Bees struggled to find offensive rhythm as they fell 27-6 against Watertown in the High School Football Game of the Week.

The fourth-ranked 2A Purple Tigers (8-1, 4-0) used a 21-point second quarter to roll to the big win on a rainy night in Wilson County.

“They’re the better football team,” said UHS head coach Adam Caine. “They showed it. They’ve got good backs. They’re not huge, but they’re very fast and quick on defense and I think that gave us tons of problems. We couldn’t establish what we like to do and we paid for it.”

The Upperman (6-3, 4-0) defense started the game with strong play. The Purple Tigers’ second drive of the game ended with four straight stops by the UHS defense on the one-yard-line. The UHS offense was unable to capitalize, being forced to punt the football.

The Purple Tigers then got on the board with a 10-yard touchdown pass from Brayden Cousino to Quenterrius Hughes-Malone to give Watertown a 7-0 lead.

The momentum continued to shift towards the Watertown sideline after they intercepted a Thomas Ensor pass. On the next play, Jordan Cason took a handoff 46-yards for a touchdown to move the WHS lead to 14-0.

WHS moved the lead to 21-0 just before halftime on a trick play double-pass for a 79-yard touchdown.

“That was a fantastic call that they had on the double-pass,” said Caine. “They outcoached us, they outplayed us.”

The Purple Tigers put the game away early in the third quarter with a one-yard touchdown rush by Cason.

Upperman avoided being shut out late in the fourth when Ty Dutchess found junior receiver Daniel Metzgar down the sideline for a 70-yard touchdown pass to move the game to the final score of 27-6.

Cousino went 8-10 through the air for 147 yards and two touchdowns. He also added 41 yards on the ground on eight carries. He led the Purple Tigers to a 45% third down completion percentage, compared to 18% for Upperman.

“The guy that had me the most worried was the quarterback,” said Caine. “He’s a third down assassin. He showed it tonight. That kids a player.”

Dutchess went 6-6 through the air for 87 yards and a touchdown. He added 29 rushing yards on 12 carries.

Ensor went 3-8 for 20 yards and an interception. Terrance Dedmon rushed for 38 yards on 10 carries. Metzgar caught two passes for 67 yards and a touchdown.

Caine summed up the game with a simple phrase.

“It was a struggle,” said Caine.

The Region 4/3A champion Bees will look to regain their momentum before the postseason with a region matchup against Sequatchie County (2-7, 1-3) to wrap up the regular season. Kickoff is set for 7 p.m. Friday in Baxter.