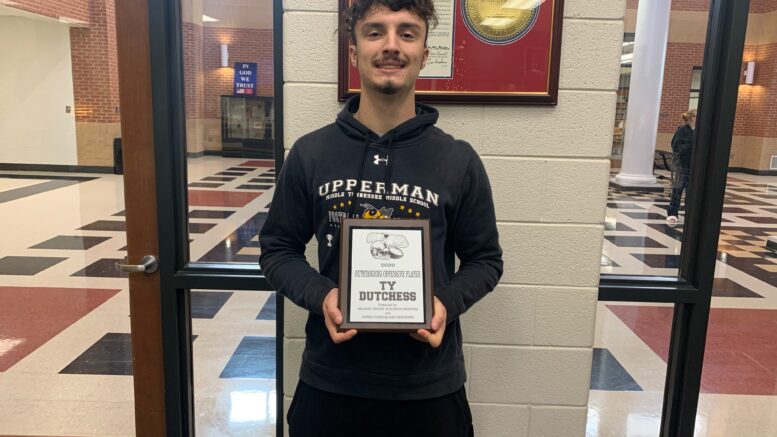 Upperman High School football athlete Ty Dutchess emerged as one of the top athletes in the area during the 2020 season.

Dutchess showed his abilities on the ground and through the air during the season, earning the UCR and Nelson Trophy and Screen Printing Offensive Player of the Year award.

“It feels amazing to know I’m getting some recognition for the work I’m putting in during the offseason,” said Dutchess.

Dutchess, a junior, rushed for 1,200 yards and 15 touchdowns in 11 games played, while adding 486 yards and three touchdowns passing.

He was the catalyst for an Upperman team that went 8-4, won a playoff game, and earned their third straight Region 4/3A championship.

In addition to the UCR award, Dutchess was also named Region 4/3A Player of the Year. He said the attention is nice, but he likes to be behind the scenes and then emerge.

“It’s nice to be at the forefront of things,” said Dutchess. “But, I kind of like to be in the back. Be the person that’s not really known. Once I emerge then people start giving me credit for what I’ve been doing.”

Dutchess showed an ability to create explosive plays with his legs throughout his junior season. He said he thinks his running ability is his biggest strength right now.

He added he is working on protecting the ball and reading defenses as he prepares for a senior season as one of Upperman’s leaders.

“(I’m working on) ball handling,” said Dutchess. “And reading more of the defensive keys and coverages.”