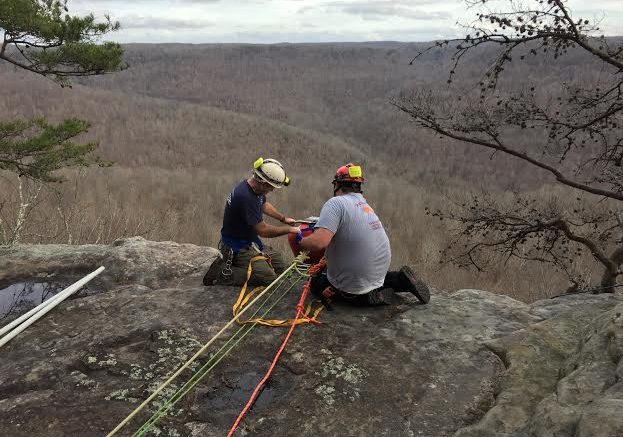 The Putnam County Rescue Squad’s High Angle Rope Rescue Team Rescued An Adult Fall Victim At Bee Rock, after a rappelling accident.
MONTEREY, TENN – It is unclear what caused the 54 year old rappeller to fall, but her injuries were such that the Rescue Squad’s High Angle Rescue Team was summoned to the scene.
“We received a 911 call that someone had fallen from a significant height at Bee Rock, and that she was seriously injured,” stated Putnam County 911 director Mike Thompson. “The caller was able to give us clear and detailed information to allow dispatchers to initiate the appropriate agency responses without delays,” he explained.
Coincidentally, a Putnam County paramedic was hiking in the area with his family and witnessed the fall. He was able to begin assessing the patient before initial responders arrived.
When the team was alerted, around 12 members responded, carrying rappelling equipment, 4-wheelers, and a specialized Gator that is equipped to transport patients in areas not accessible by other means.
Under the command of Putnam County EMT and rope rescue team leader Eddy Haynes, the group quickly rigged a rope system to lower a Stokes Basket (a specialized piece of equipment that carries the patient while suspended on ropes) to rescuers with the patient below.
Putnam County EMS and rescue personnel had already made initial access to the patient by walking the jagged trail leading around the bluff face, but because of many rescues like this one before, they knew lifting the patient up the bluff was the safest way to extract her.
Once the patient was secured in the Stokes Basket, an EMT clipped into the basket as well (to help care for the patient during the lift) and rescuers methodically lifted them both to the top.
“We have a very dedicated team of folks who always come to these rescues, knowing it’s going to be hard work and knowing the conditions are difficult,” stated Anderson.
A University of Tennessee Lifestar helicopter was waiting in Monterey to transport the patient to UT Medical Center, in Knoxville, for advanced trauma care. The patient was considered to be in serious condition at the time of transport.
The Rescue Squad’s High Angle Rope Rescue Team is a partnership between Putnam County EMS and Putnam County’s Rescue Squad, with medical team members capable of being on ropes to provide care during missions like this one.
Anderson continued, “These calls require a lot of teamwork and that’s something we have no shortage of here in Putnam County. The fire department had our trailers hooked up and ready for us, Monterey Fire was handling the landing zone five miles away, and everyone at the scene did whatever was necessary to help take care of the patient and keep each other safe. We are fortunate to have the relationships and personalities we do here.”
Agencies who responded to assist with the call were the Putnam County Rescue Squad, Putnam County EMS, Monterey Fire Department, and Putnam County Sheriff’s Department. 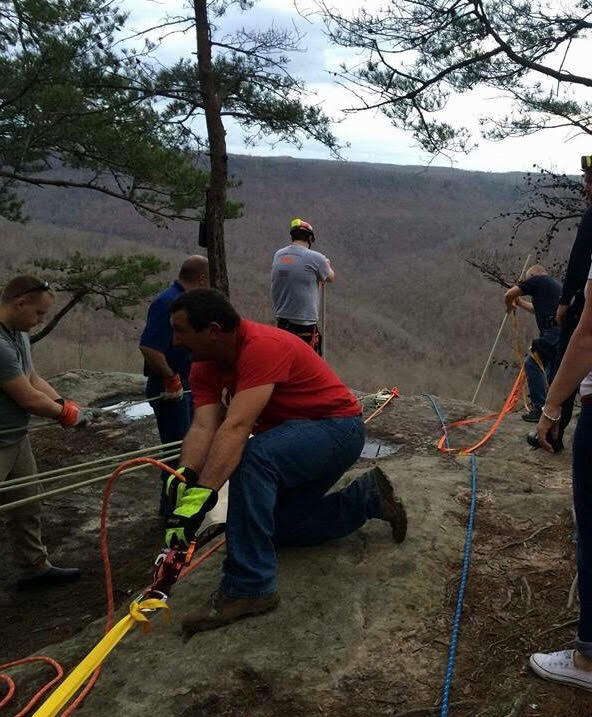 Ride For Life – Relay For Life