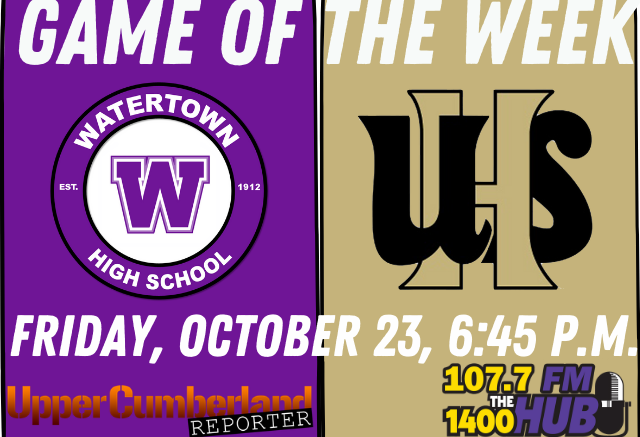 The Upperman Bees are preparing for one of their toughest tests of the 2020 football season, the Watertown Purple Tigers, in the High School Football Game of the Week.

“The biggest thing that jumps off the tape is they’ve got some running backs that run hard, have good speed and they are really trying to get it into the end zone every time they touch it,” said UHS head coach Adam Caine.

“We’re a team that hasn’t always tackled real well this year, so it’s going to be crucial if we want to be competitive in this ball game. They’re probably the best team we’ve faced this year.”

The Bees are becoming familiar with facing talented tailbacks. They struggled against Cookeville and Livingston Academy’s rushing attacks, while finding success against Oneida.

Caine said he thinks his team’s experience will prepare them to take on Watertown.

“I think the biggest key for us is we’re learning how to play with great effort on defense,” said Caine. “It’s a lot easier to tackle someone when you’ve got two or three other guys with you trying to help get the guy on the ground. Especially with these dynamic backs that (Watertown)’s got.”

The talent for the Purple Tigers does not end with the tailbacks.

“They’ve also got a great receiver too,” said Caine. “Their linebacker core is probably the best we’ve seen all year.”

Caine also said it is fair to call the matchup a measuring-stick game, despite the fact the teams are a classification apart.

The Bees have largely been a running football team in 2020, rushing for over 230 yards per game, but the passing attack has shown life in recent weeks. Quarterbacks Ty Dutchess and Thomas Ensor have combined for nearly 350 passing yards in wins over York and Grundy County.

Caine said maintaining a balanced offense is a goal this week.

“We’re going to have to continue that this week,” said Caine. “I’d like to see our pass attempts and our rush attempts be pretty similar. The key there is you’ve got to be efficient in the air. You can’t be throwing incompletions. We worked on it and hopefully we can get those guys the ball on the outside and make some noise out there.”

Kickoff between the Purple Tigers and Bees is set for 7 p.m. Friday in Watertown. It is the High School Football Game of the Week and will be broadcast live on the UCR Facebook page and on Newstalk 107.7 and 1400 the HUB with pregame coverage starting at 6:45.